The recent 125th anniversary celebration of the Kanisteo Valley Chapter of the Daughters of the American Revolution (DAR) was noted in a proclamation by Steuben County Legislature Chairman Scott Van Etten, R-Caton. In his proclamation, Van Etten noted the chapter was organized on Nov. 11, 1897, and awarded its charter on Apr. 19, 1898 by with 20 women from the Canisteo and Hornell area on the original charter and Mrs. Harriett Benton McConnell serving as the Organizing Regent of the Chapter. 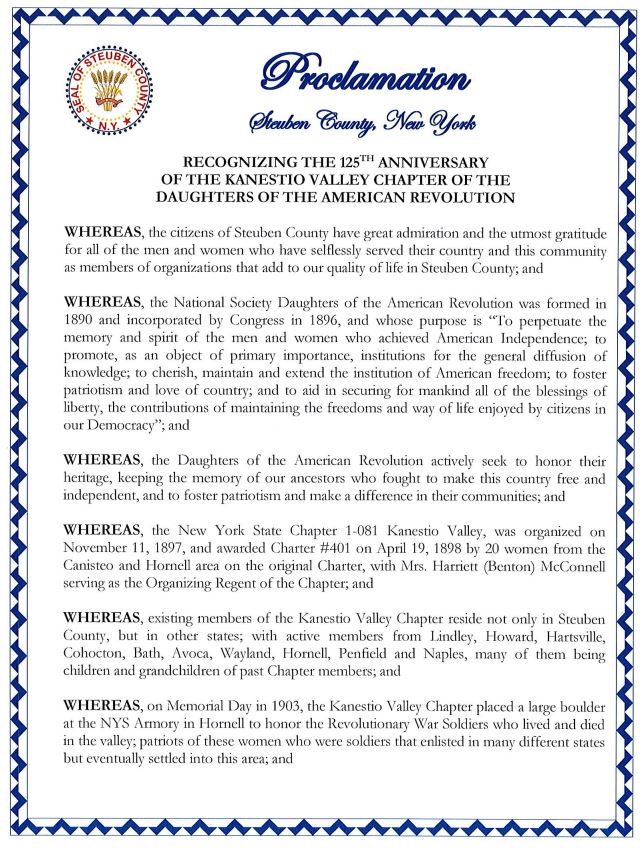 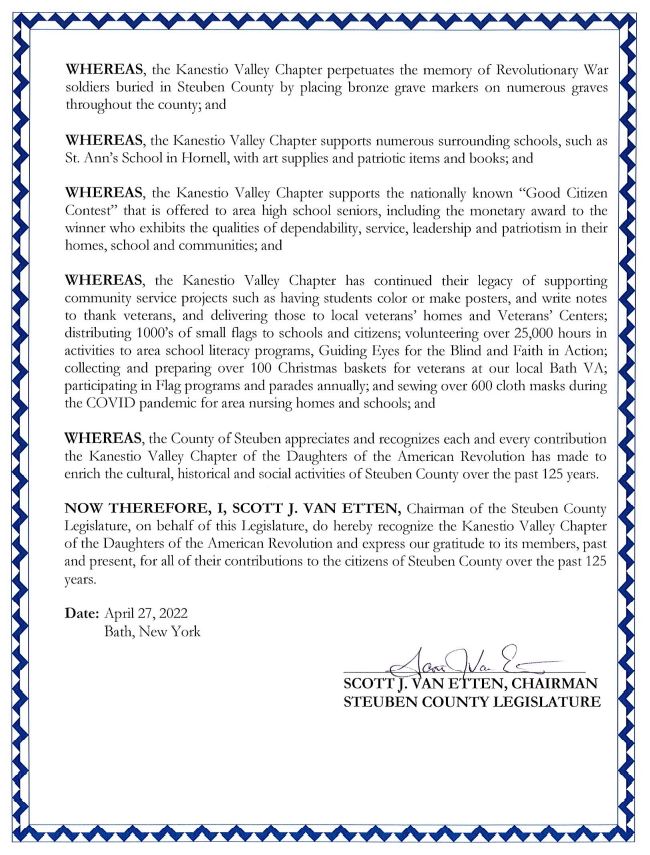 On Memorial Day in 1903, the Kanestio Valley Chapter placed a large boulder at the NYS Armory in Hornell to honor the Revolutionary War Soldiers who lived and died in the valley; patriots of these women who were soldiers that enlisted in many different states but eventually settled into this area. He noted the chapter perpetuates the memory of Revolutionary War soldiers buried in Steuben County by placing bronze grave markers on numerous graves throughout the county, and provides numerous services to schools, veterans, and related agencies. “The motto on God, Home and Country has been very evident,” said Minnie Haines Brennan, Kanestio Valley NSDAR, Regent.

“Each year programs such as the DAR Good Citizens Award, created in 1934, is intended to encourage and reward the qualities of good citizenship. These area graduating Seniors possess the qualities of dependability, service, leadership, and patriotism in their homes, schools, and communities. Other programs such as Flag Day, Constitution Week and Literacy Week reach numerous schools around Steuben County. “We thank the Steuben County Legislature for partnering with us through the years by providing special speakers when needed and in keeping our beautiful area a place to call home, just like our ancestors did over 200 years ago.” Brennan noted the chapter gathered together on Apr. 30 at the huge boulder monument unveiled on Memorial Day 1903 in front of the NYS Armory in Hornell to “Honor their Roots.”

The recent celebration reflected on how the 20 Founding Ladies and their “can do” spirit, still survives today. “This monument stands as a testament to honor the Revolutionary War Patriots who came the Canisteo Valley area who sacrificed their lives and fortunes to make our country free,” she said.

Two ribbon cutting ceremonies in Hornell set for Thursday May 12

For the Goldman Family, Alfred NY is home