The Hornell Red Raiders baseball team finished 16-5 and dropped a tough 5-4 loss to Batavia in the Section V Class B1 semi-finals.

“We owe a big thank you to all of our seniors who played huge roles for this team and had a lot of success over the course of their careers,” said Hornell coach Jake Kenney. “They’ve set a high bar and will be difficult to replace but their contributions to the program have made a lasting impact.

“Against Bath, I was proud of the way we battled back into the game. We had one bad inning but kept fighting and had a chance there at the end,” Keney continued. “That was how this team always played, it didn’t matter if we got down, they believed they were going to come back and win any game they played. That mentality kept us in games and we came up just a little short.”

Below is a report on the Bath Section V win and other scores. Here is a Steve Harrison photo gallery of the final game: 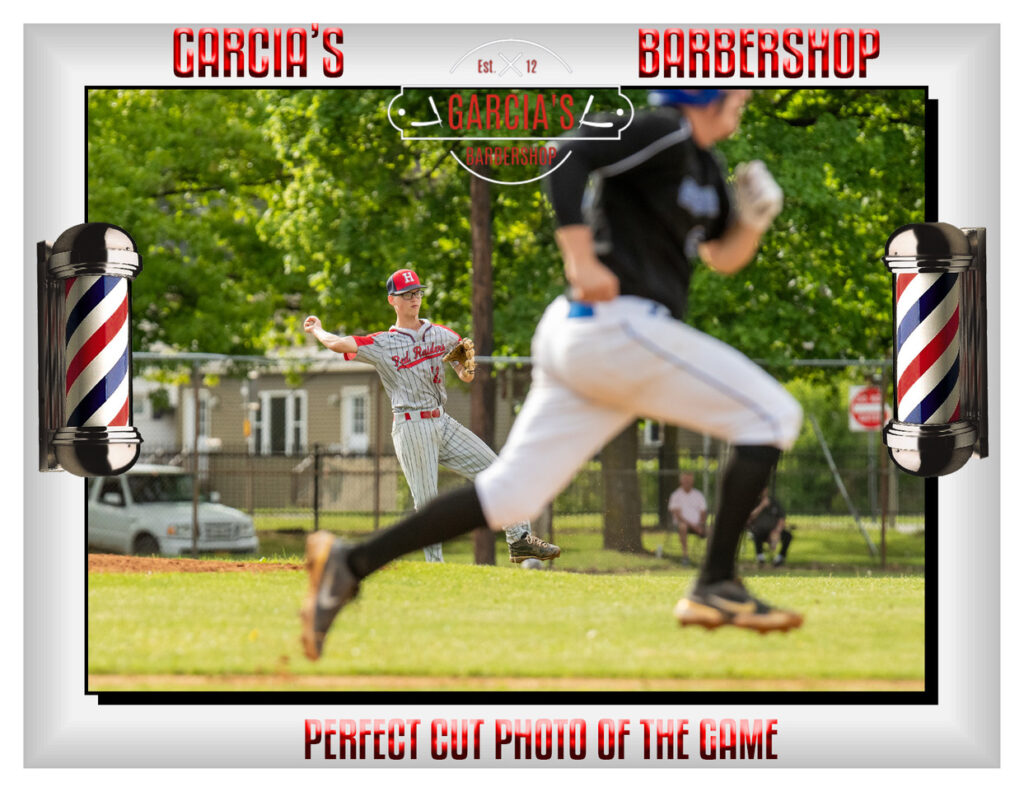 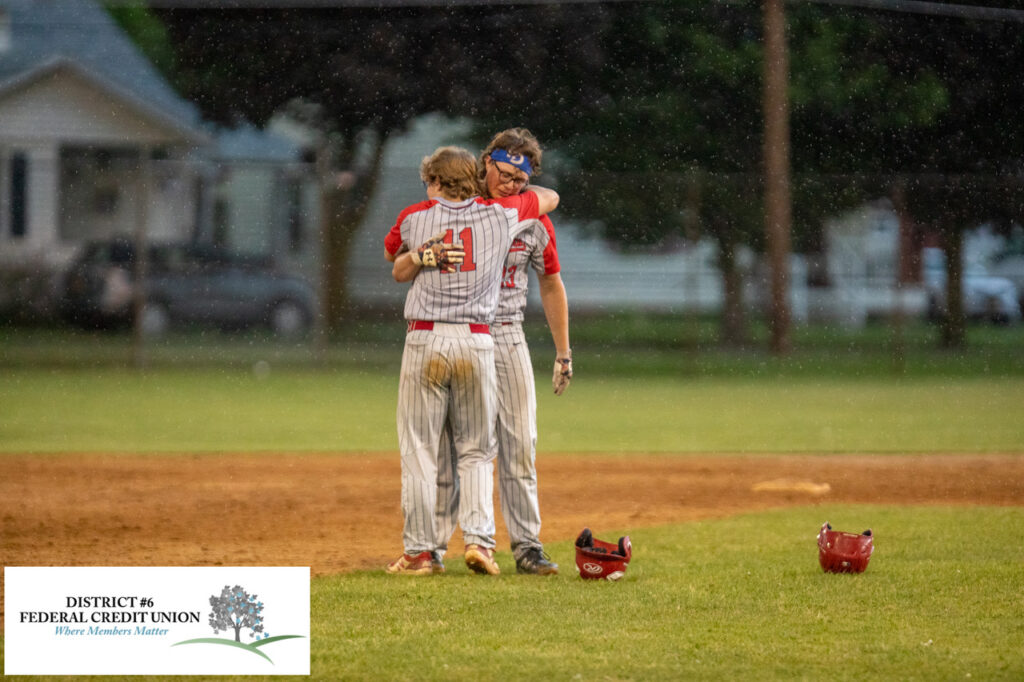 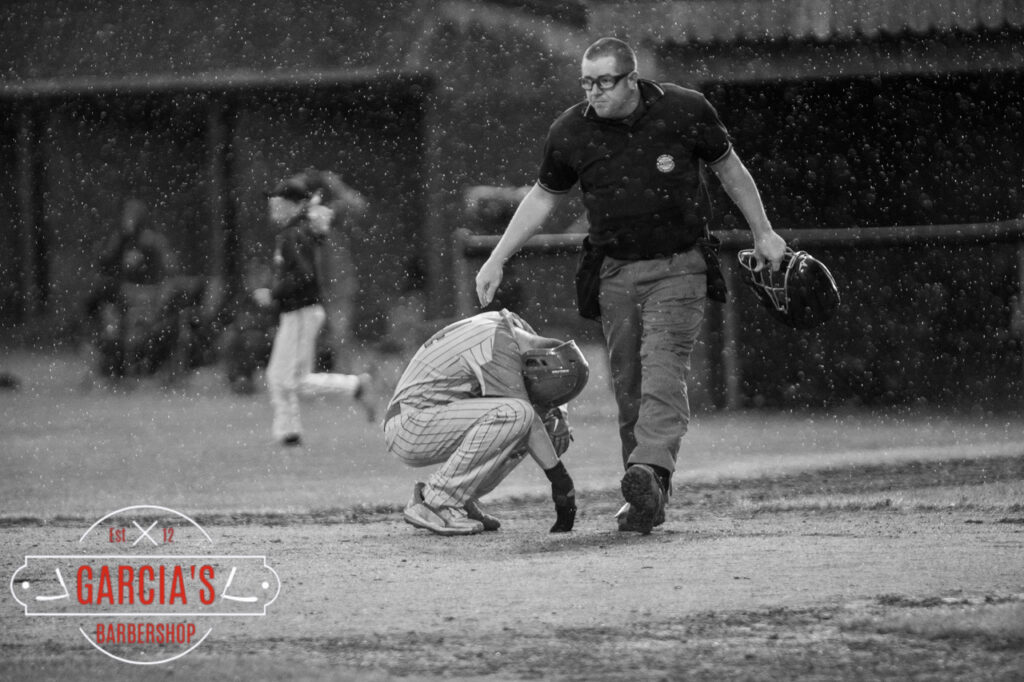 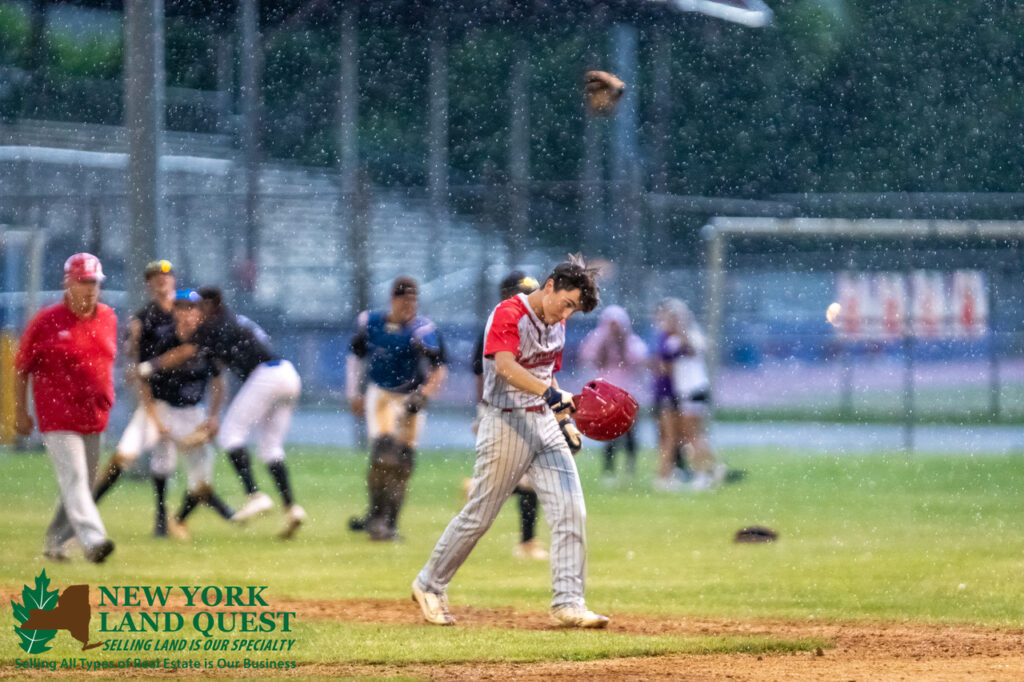 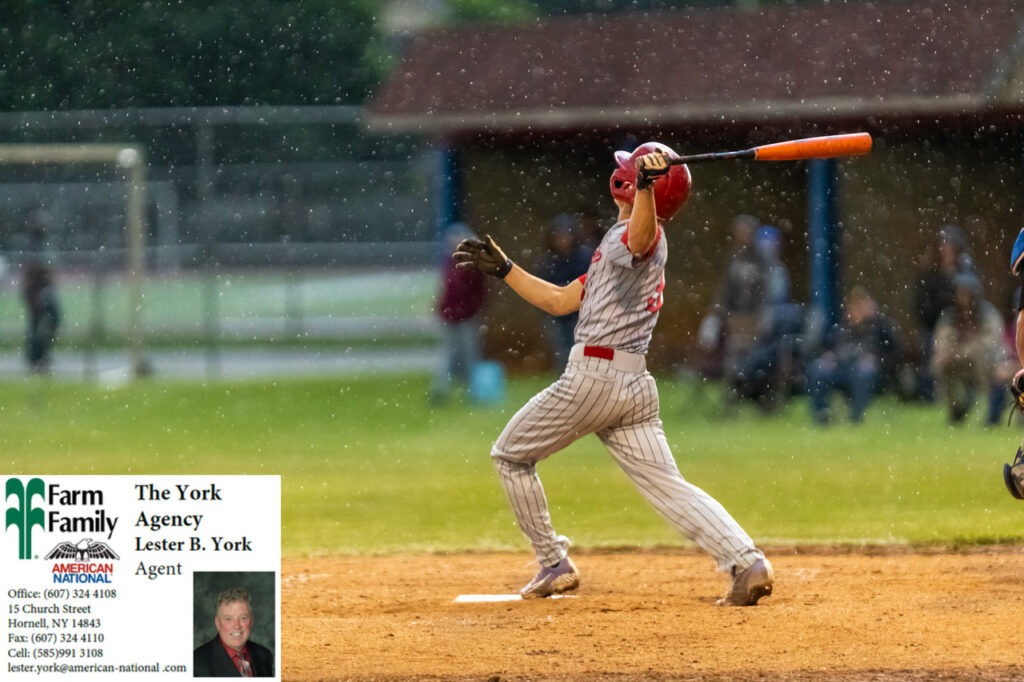 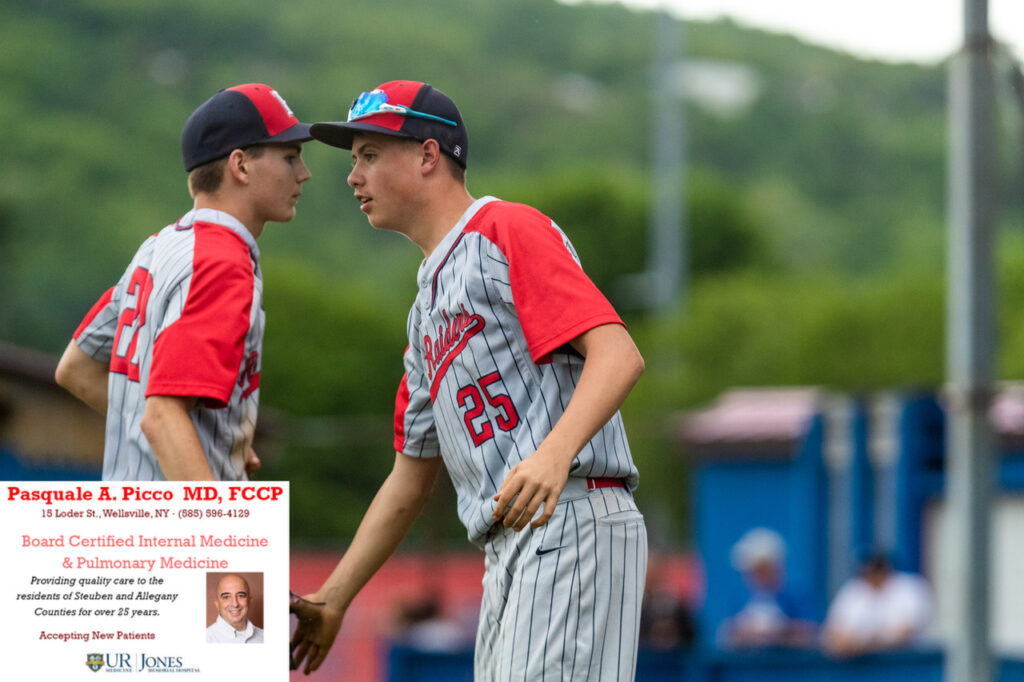 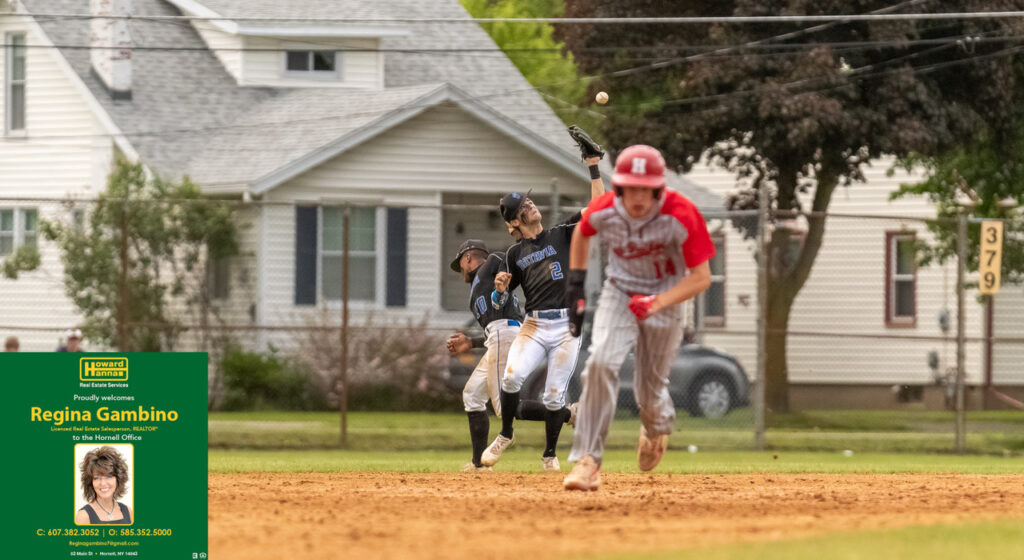 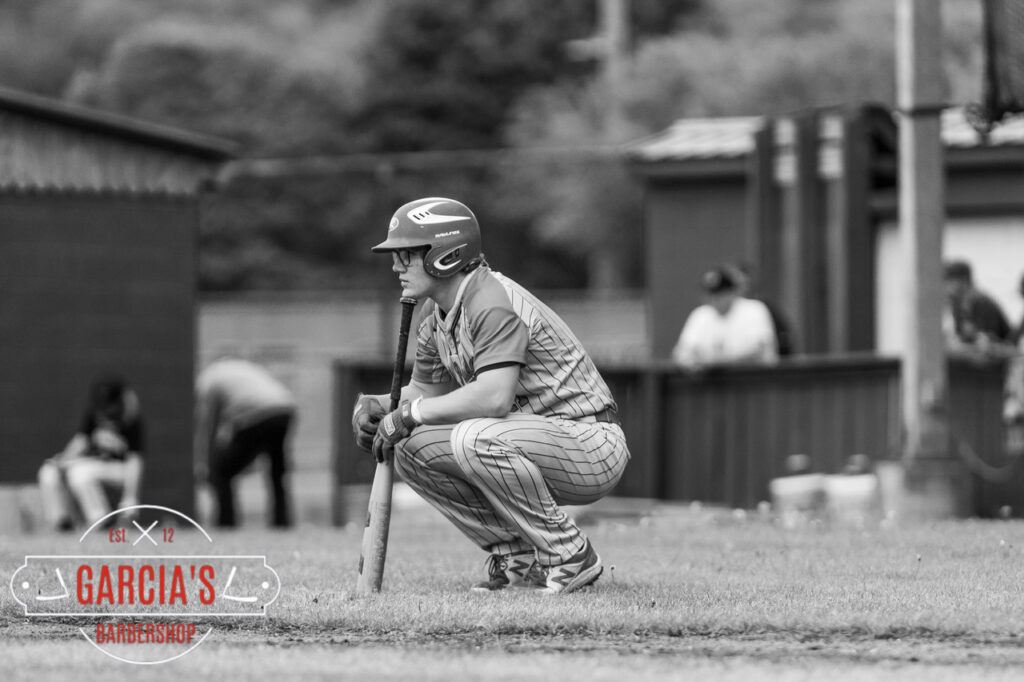 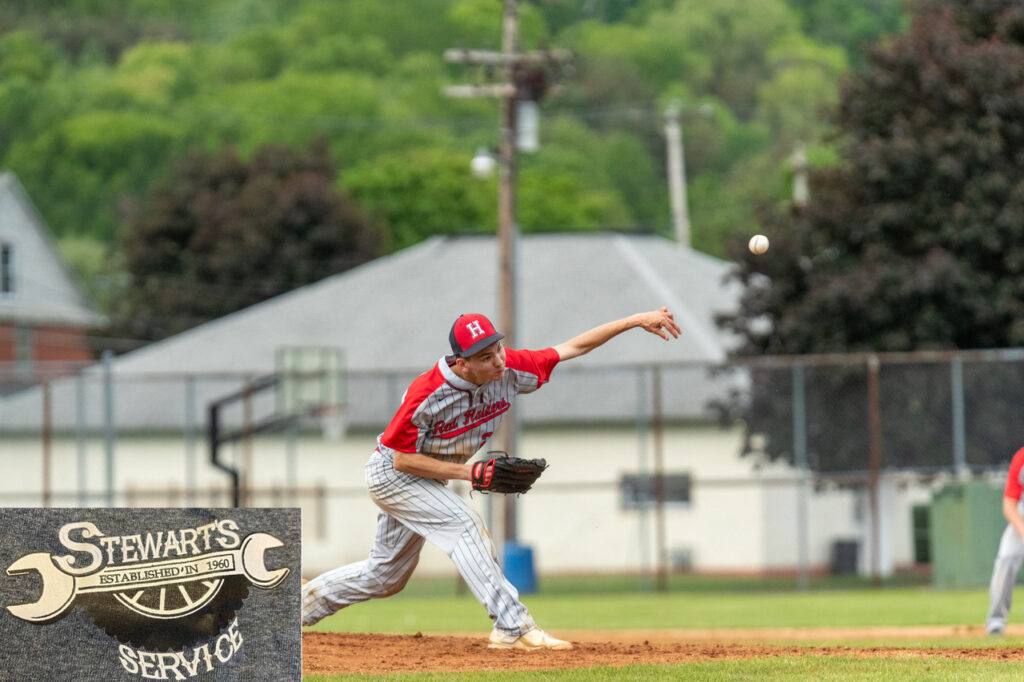 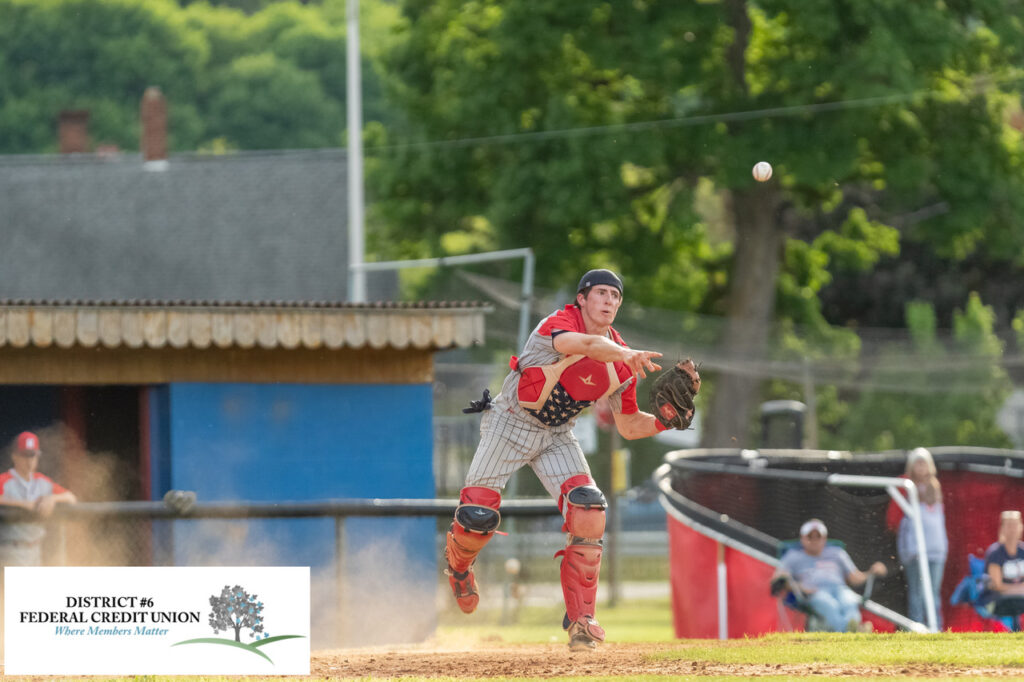 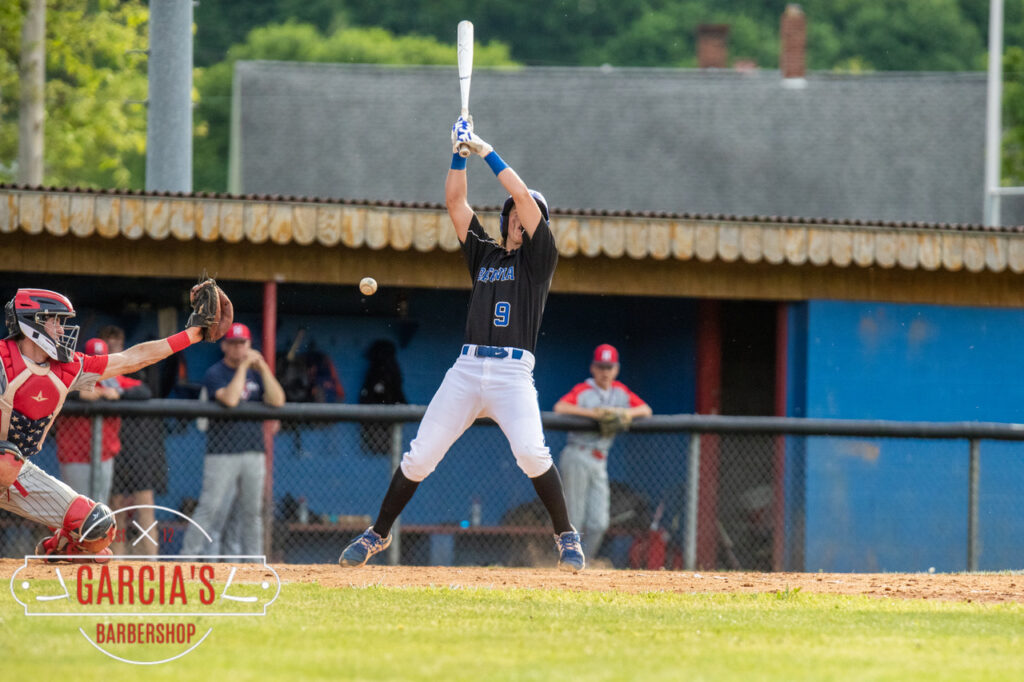 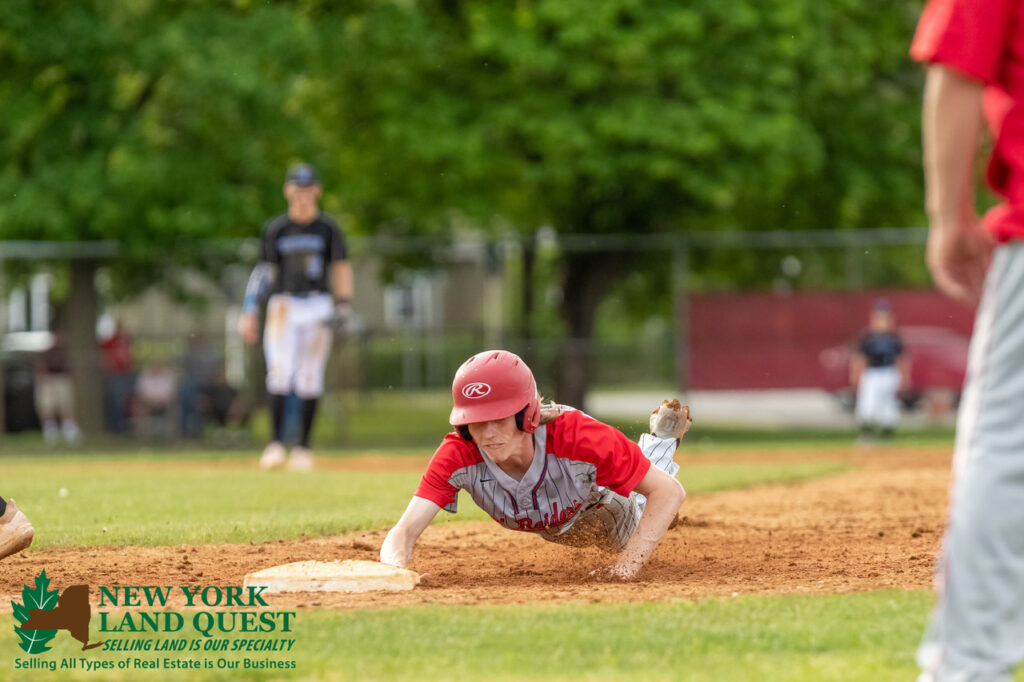 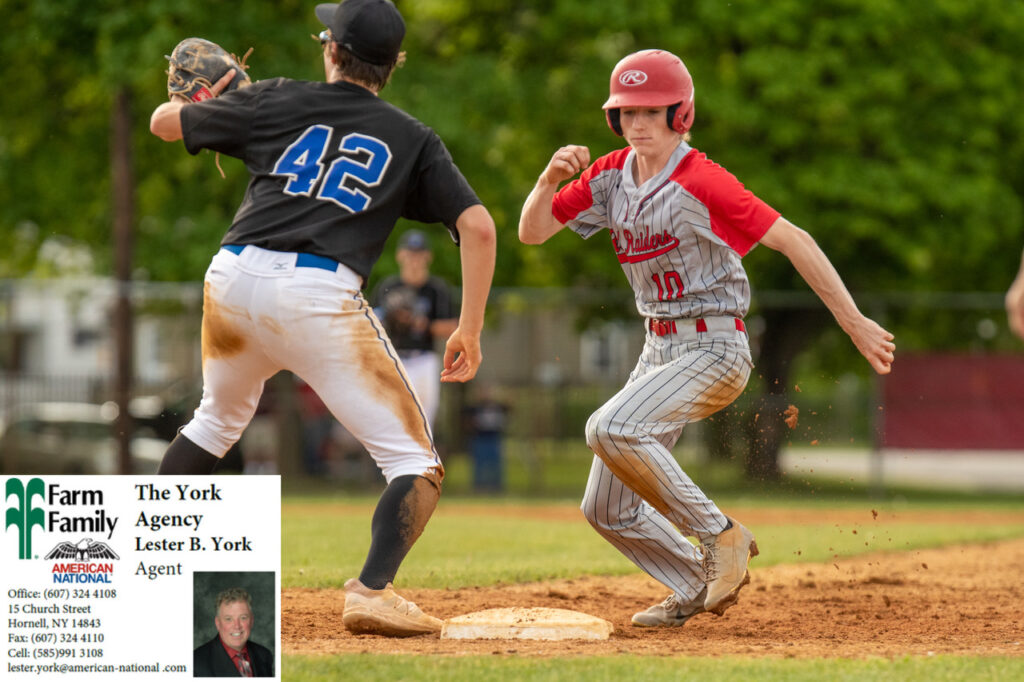 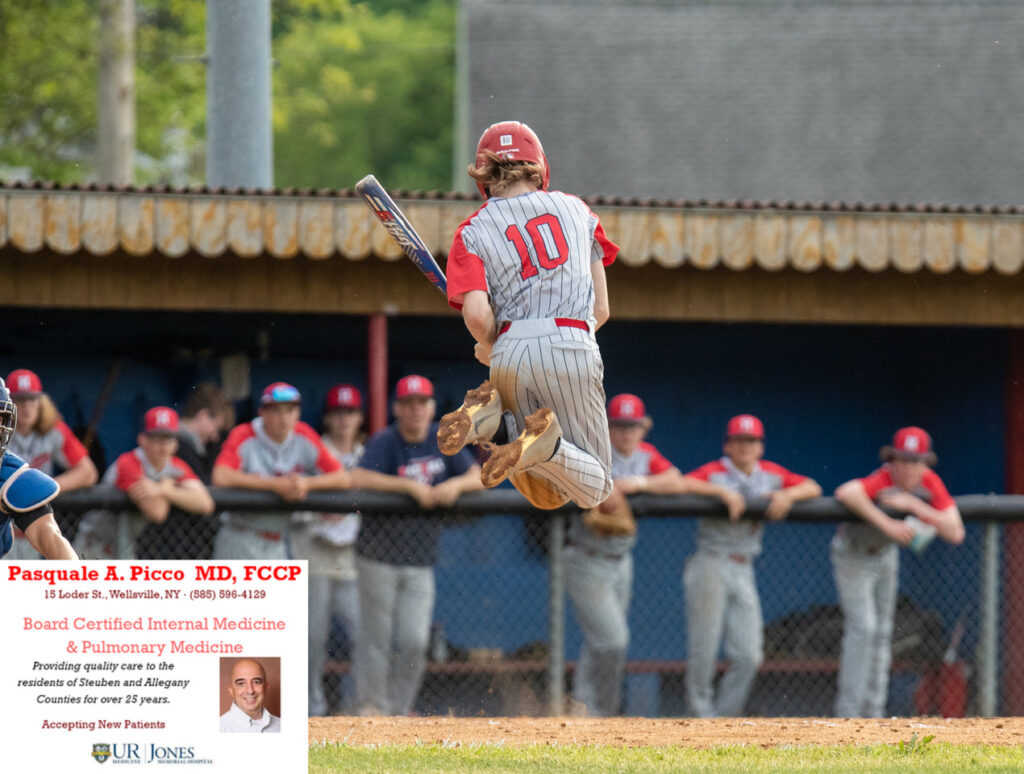 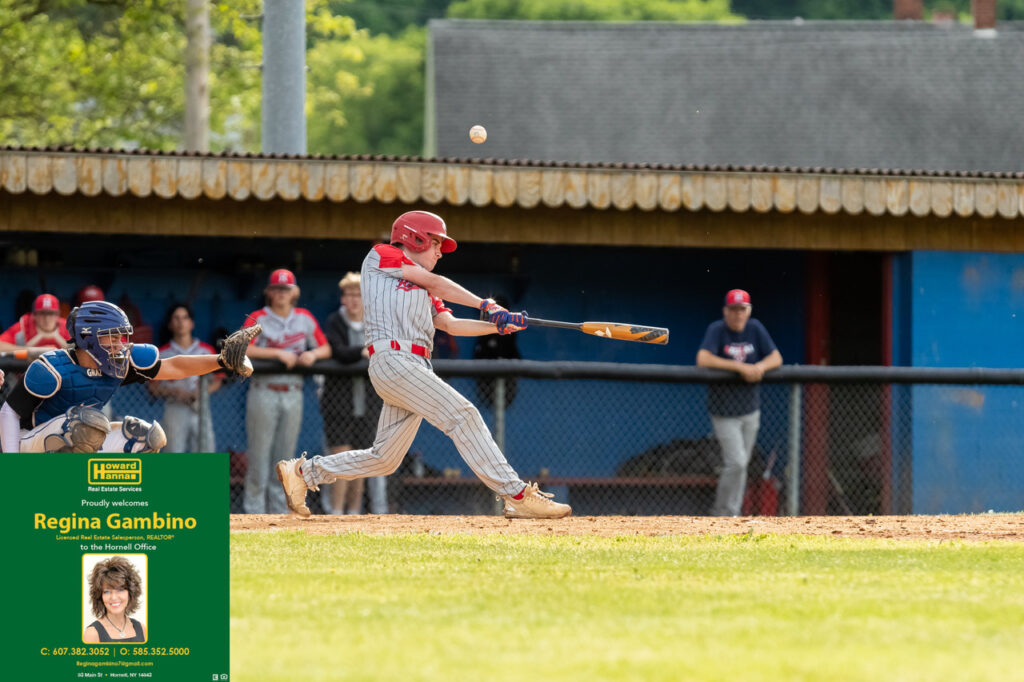 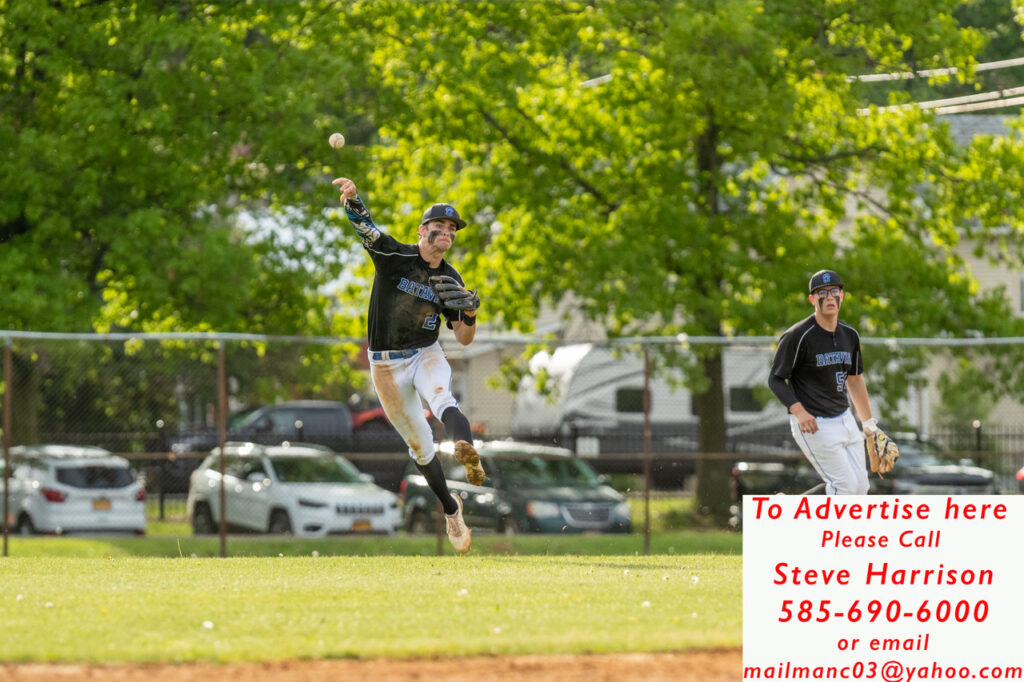 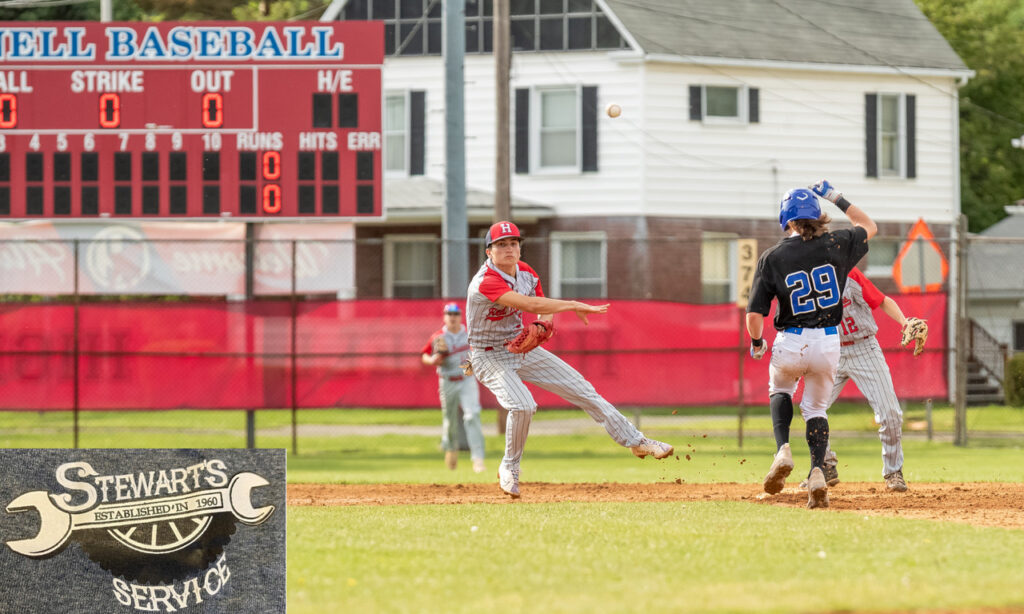 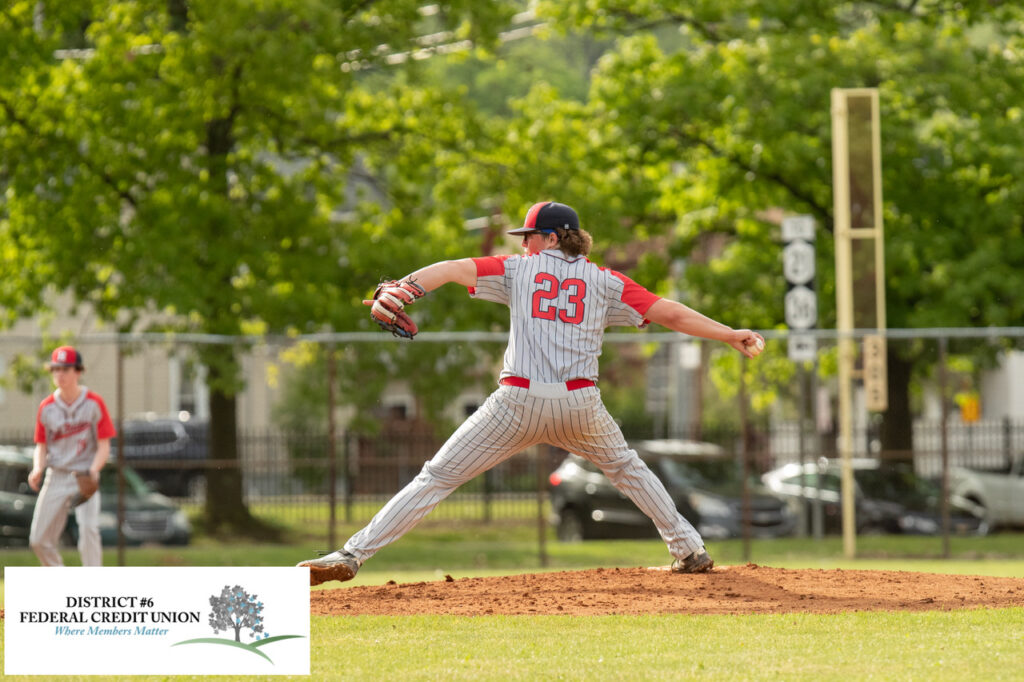 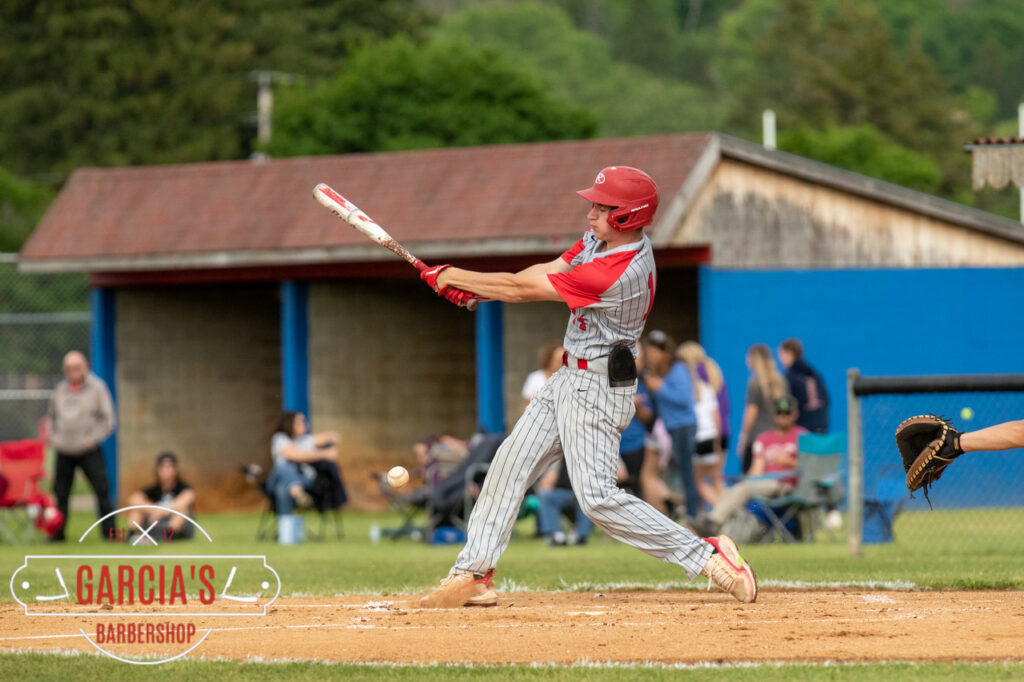 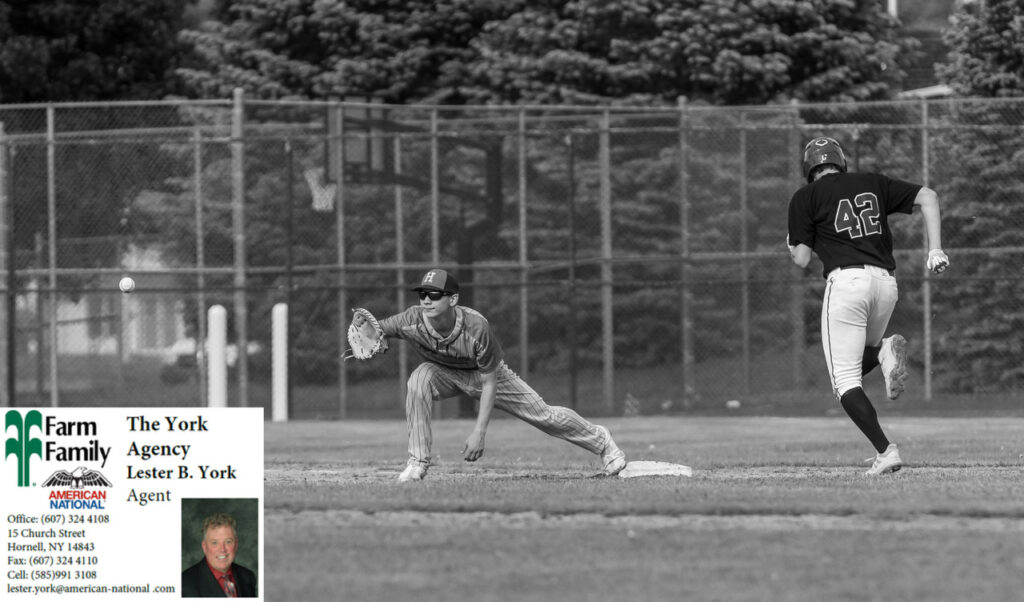 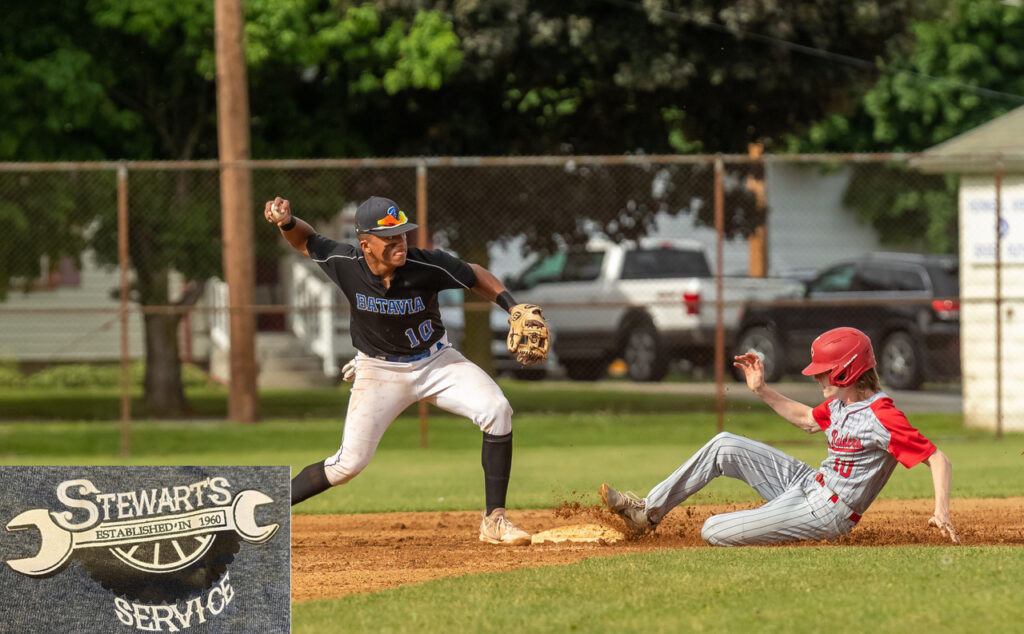 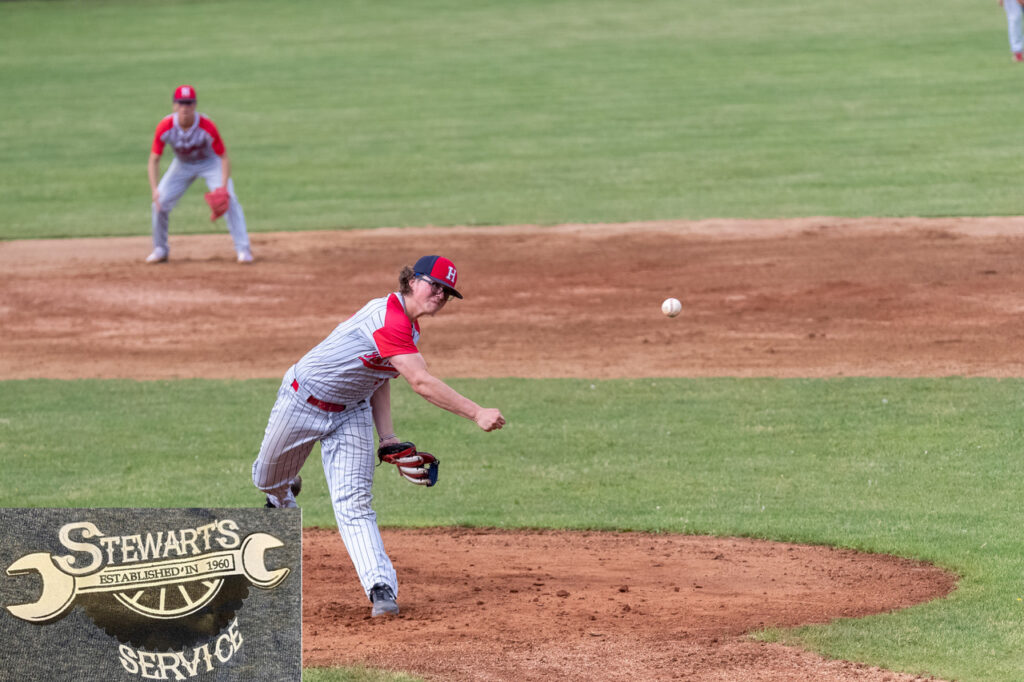 NO. 2 LE ROY (15-6) 0
NO.1 HAVERLING (18-2) 5
Zach Musso tossed up a complete-game shutout by striking out 12 batters, while allowing two hits, and one walk, as top-seeded Haverling tOOK home their first sectional championship in 12 seasons. AJ Brotz had a solo-shot to left field, to open up the bottom-of-the-third. The senior went 3-for-4, with two RBI, and two runs scored. Senior, Gavin Buckley added a hit and two RBI, coming off a sacrifice-fly in the bottom-of-the-third, that scored Musso for the Rams second run, and a two-out single to right, bringing  home Brotz, making the score 3-0. Two more runs were tacked on in the sixth, thanks to a leadoff double by Collin Coots, who scored off an error, followed by a two-out single by Brotz, scoring Evan Pendle. Ethan Brotz went 2-for-3. Le Roy’s pitching trio of Jackson Spezzano, Ethan Miller, and Ayden Riggi combined for seven strikeouts, and allowed seven hits and one walk. Miller saw the most work, striking out five, and allowing one earned run over three innings. Ryan Higgins and Ty Strollo both had hits.

Haverling’s last title win was in 2010, when the Rams won three straight Class BB titles. They will play Palmyra-Macedon in the NYS Class B Regional Qualifier on Wednesday. The game is scheduled for Livonia High School.

NO. 2 OAKFIELD-ALABAMA (16-3) 8
NO. 1 NOTRE DAME BATAVIA (20-2) 7
David Schnaufer recorded three RBI, leading the way in a five-run third inning, as Oakfield-Alabama wins their first regional title since 2003, claiming Class C2.
In the third, Schnaufer lined a single to right field, bringing home Brayden Smith and Cooper Colantonio to make the score 6-1. Schnaufer singled earlier in the second, to tie the score at one apiece. Kyle Porter and Bodie Hyde led the third frame off with a single and a double. Porter scored via a walk drawn by Colantonio, after Smith was intentionally walked to load the bases. Gaige Armbrewster reached on an error, causing Smith to score, and proceeded to stole home for the final run of the frame. Armbrewster was credited with a second RBI, hitting home the winning run in the top-of-the-sixth, as Aiden Warner beat out a throw home, to make the score 8-6. Colantonio finished with two RBI, while Hyde went 2-for-3, with two runs. Kyle Porter started the game on the mound. Through five innings, the junior struck out eight batters, while giving up nine hits, three walks, and six earned runs. Colton Yasses closed out the game, allowing one hit, one earned run, and a walk. He also added a hit. Norte Dame Batavia scored four unanswered runs, starting in the bottom-of-the third. Bryceton Berry went 3-for-3, with three RBI, and a run scored. His first RBI came in the in the first, off a single to centerfield for the games first run, then followed it up with a two-out single in the bottom-of-the-third, to start off the rally. Facing a two-run deficit in the bottom-of-the sixth, he connected for a third single, driving in the final run of the game. Gavin Schrader scored on all three occasions. Schrader added two hits. Cody Henry went 2-for-3, with two RBI.

NO. 2 NORTHSTAR CHRISTIAN (15-5) 3
NO. 1 BOLIVAR-RICHBURG (22-1) 6
Wyatt Karnuth, Landon Danaher, and Trey Buchholz combined to strikeout 11 batters, and allow two hits, as Bolivar-Richburg won their fourth-straight regional title, claiming the Class C2 title. Danaher started the game through three innings and did not allow a hit, striking out six of the 14 batters he faced. Karnuth tripled to start the scoring in the first, bringing home Buchholz, and scored on a sacrifice-fly by Camdyn MacDonell for the game’s first two runs. At the mound, the senior relieved in the fourth, going three and one-third innings, striking out four batters, and allowing two hits, three walks, and two earned runs. Buchholz struck out one and walked one, through the final three batters. At the plate, the sophomore went 2-for-3, and scored twice. The Wolverines scored four runs in the second inning, courtesy of doubles by Evan Pinney and Karnuth, and sacrifice-flies by Danaher and MacDonnell. Pinney and Karnuth scored off wild pitches. Northstar Christian put together a two-run seventh inning, as A.J. Mitchell was credited with an RBI, after being hit by the pitch. Dom Kurmis had a one-out single, and scored the final run off a wild pitch. Da’vonn Stevens scored the Knight’s first run, taking advantage of an error in the top-of-the-third, making the score 6-1.

This is Bolivar-Richburg’s seventh regional title in the last nine seasons.  They advance to play the winner of Letchworth/Oakfield-Alabama.

Two school board meetings planned this month for Hammondsport