Home » Pedaling it Forward: The incredible story of Hornell’s Larry Pelkey who donates bikes to the community

Pedaling it Forward: The incredible story of Hornell’s Larry Pelkey who donates bikes to the community

In October, a Hornell man will be donating 50 bikes to people in the community. Something he does every Saturday, but he is working on a large inventory to help those in need or who want to start a new fitness journey. It’s a wild ride for the man who is known for giving a run at success.

Many of you may have seen Larry Pelkey running up and down the streets of Hornell as he trains up to 12 miles a day for his ultra marathons which are 30.8 miles long.

With the support of Rochester Runners Club out of Penfield, he continues his personal goals in overall health through running.

But who is that guy that runs all over?

Larry is 65 years young as you would never be able to tell his age as he is constantly on the go! He was born in Caribou, Maine. At a very young age, he moved to the Canisteo Valley and has called Hornell home since 1961.

He graduated from Hornell High School and later on in life retired from Philips Lighting in Bath. Learning something new in life and staying active is always a goal for Larry.

Not being very mechanical, as he states, he would recall back to his nephew who would get a new bike for Easter or a birthday, and as soon as the bikes would become a little disheveled he would get a new one.

Also hearing people say, ‘I wish I could run, but my knees bother me’ and riding a bike was a way for someone with bad knees to get a low impact workout.

Coming from a family with health issues related to diabetes, being active and taking care of your health is a way to live a long, healthy productive life.

Thinking back on that is how this journey has started for over nearly two years now.

Running or driving around town, Larry would see people throwing out bikes or selling them for a few dollars at yard sales. The idea for “LARRYS BIKES FOR EVERYONE” was brought to reality on Oct. 2,  2021.

Where does he find all the bikes?

Well, Larry frequents area yard sales searching Facebook paying up to $20 for a bike. Sometimes, people will just show up at his house at 18 State St in Hornell and drop them off. He has attended local police auctions to secure bikes. And one of the biggest boosts to his incredible inventory is a not-for-profit organization in Rochester called R Community Bikes. They are located at 226 Hudson St. and give away bikes every Saturday morning, but they also repair bikes free of charge two days a week strictly staffed by volunteers.

R Community Bikes has been in business since 2014 and has given away over 2,000 bikes a year since inception. Larry had reached out to R Community Bikes with his vision of giving out bikes to those in need in Canisteo Valley and they welcomed him with open arms.

Manned with only a car, he knew that he wouldn’t be able to get as many bikes as he hoped. So Larry hired his nephew with a truck and a trailer to head north for a load of bikes.

His first trip netted him a little over 60 bikes to work on and a week later he ventured north again for another 47 bikes.

Some of the bikes need fixing, of course, and that is where Larry thought learning a new skills using his hands and tools would be beneficial in his mind, soul, and his body’s overall health.

The repairs to each bike is usually the seats, handle grips, paint, rust etc.

Larry has found that cleaning up the bikes and making them new again has been a very relaxing time when he isn’t out training for a ultra marathon.

Using his own money, he searches the internet for deals on supplies. He recently found a site that had handle grips for $2 a pair and was very excited to save some money for other parts needed, such as seats, new tubes amongst many others.

Even though these bikes are refurbished its hard to tell from the care and love he finds bringing them back to life.

If a bike is dull and rusty, a kid isn’t going to be as excited to get a bike and might not take care of it.

So Larry takes the time to touch up all the paint, remove all the grease and dirt from between the spokes and apply a fresh coat of paint if needed to make it look as shiny and new as possible.

Once a week you can find bikes out front of his home at 18 State St. in Hornell with a sign on the telephone pole that simply says “FREE BIKES.”

A first, Larry thought is would just be for the younger kids. But he has found out there is a need for adult bikes as well.

So “Larry’s Bikes For Everyone” has young and old covered if you want a bike. With the area gripped by high gas prices, Larry feels that it is the middle class that is hurting the most. When a family goes to Walmart to buy their kids bikes, they are spending anywhere from $150 to $200 or more. And then if the parents want to enjoy the activity with the kids, they have to buy bikes as well. The next thing you know, the total bill is a thousand dollars or more and the middle class cant afford that right now.

So Larry, with no questions asked, will send anyone home with a new-to-you bike.

Larry stated one of the Hornell 3rd-grade teachers did an informal survey in her class asking how many kids have owned a bike and sadly less then 50% of her class has never owned a bike. As I write this story, I can recall a time when you could walk by a house and there were 10 bikes in the front yard because everyone would gather at friends houses and ride around the city together. I recall recently a group of youth came riding by on my mail route and seeing the kids laughing and having a good time riding bikes brought me back to the younger days.

Do all people wait for bikes to be out front? No.

There was a family in Hornell who couldn’t afford a bike and the child received one from Larry. The family got divorced and the dad moved 30 minutes away and the bike is at dad’s house for when the boy visits. The mom knocked at the door to see if there was a chance at getting a second bike. So, in typical Larry fashion, he opens the door and let the child pick out a bike. After a few test rides up and down the street, Larry noticed the smile on the kid.

“That is one of the most satisfying things,” said Larry, a smile as a result of his hard work.

Another time Larry was scrolling through Facebook and someone said a child who moved to the area was getting bullied. Larry was able to contact the mom and drove a bike over, he thought maybe this could give the child a smile and get him through this. Larry said as he was driving the bike to the young kid, he could see the kid out on the sidewalk waiting for Larry to arrive with a new bike! As soon as the bike was unloaded and touched the ground, the kid took off up and down the street smiling ear-to-ear.

Larry knew at that moment a good deed was ‘Pedaled Forward.’

With the cost of everything involved, “Larry’s Bikes For Everyone” would love to give a helmet with each bike because he understands the important of safety. But with helmets costing about $30 he cant afford the expense. But has recently learned that if a child shows up at the Hornell Police station they can get a free helmet.

Has Larry ever sold a bike?

Yes. He recently has a collector bike and thought long and hard about fixing it up and giving it to one child. But his neighbor stepped up and offered him $125. Thinking how that one bike could make someones days, he quickly said deal because he took that money and turned it into 13 bikes from yard sales and made 13 area kids happy instead of just one with that bike he sold.

(Editor’s Note: To help give Larry donations, any donations made through Friday using the PayPal link on the HornellSun.com site will go directly to Larry as we ‘Pedal it Foward’ for Larry’ Bike’s for Everyone) 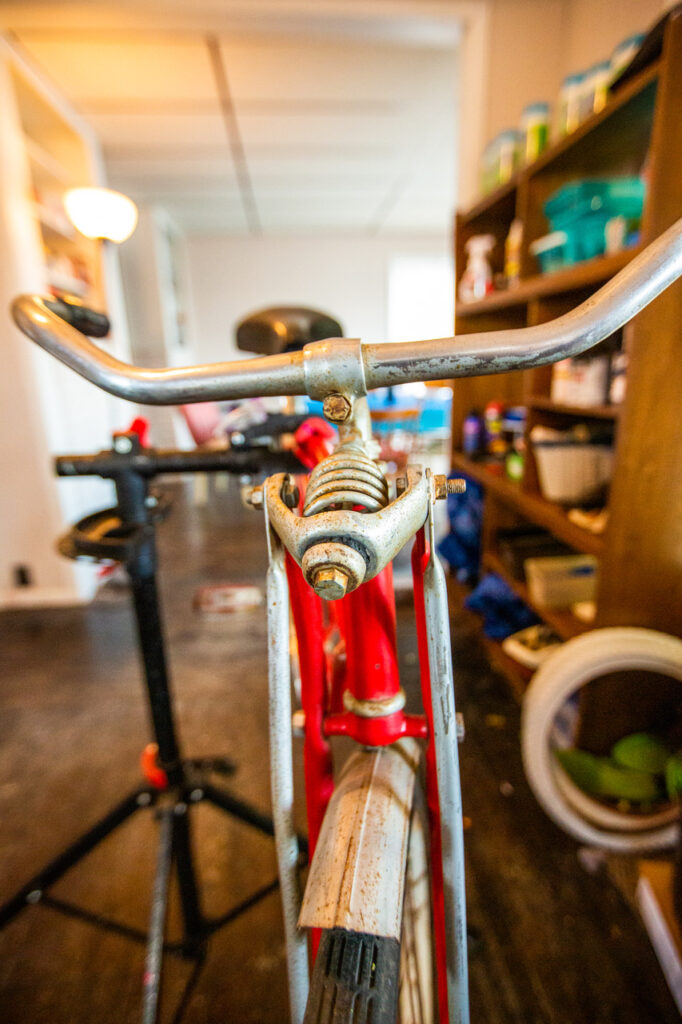 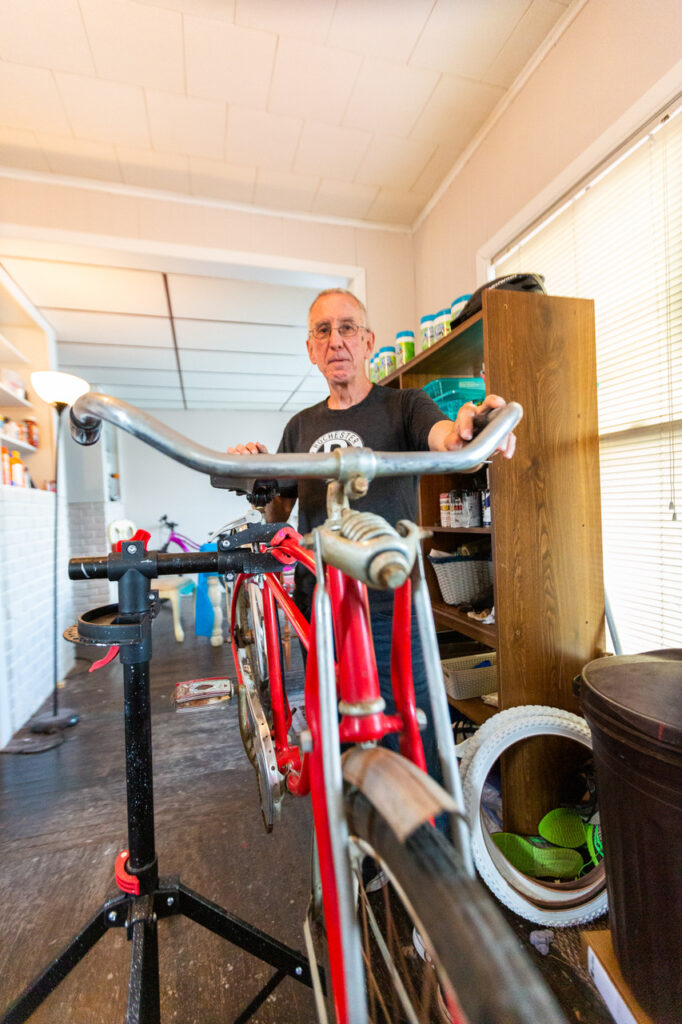 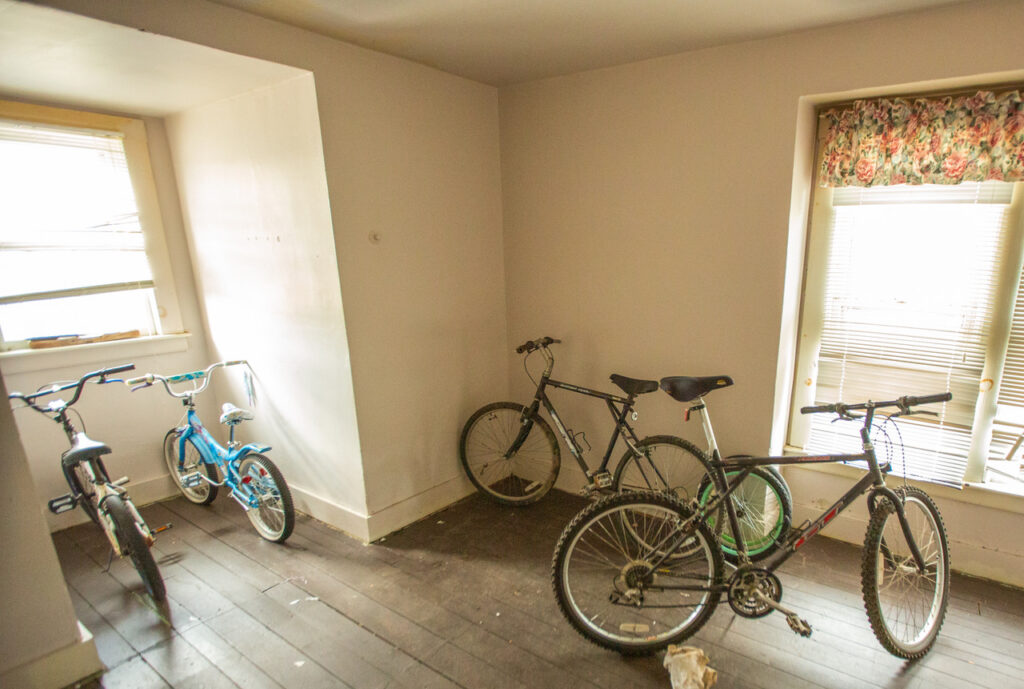 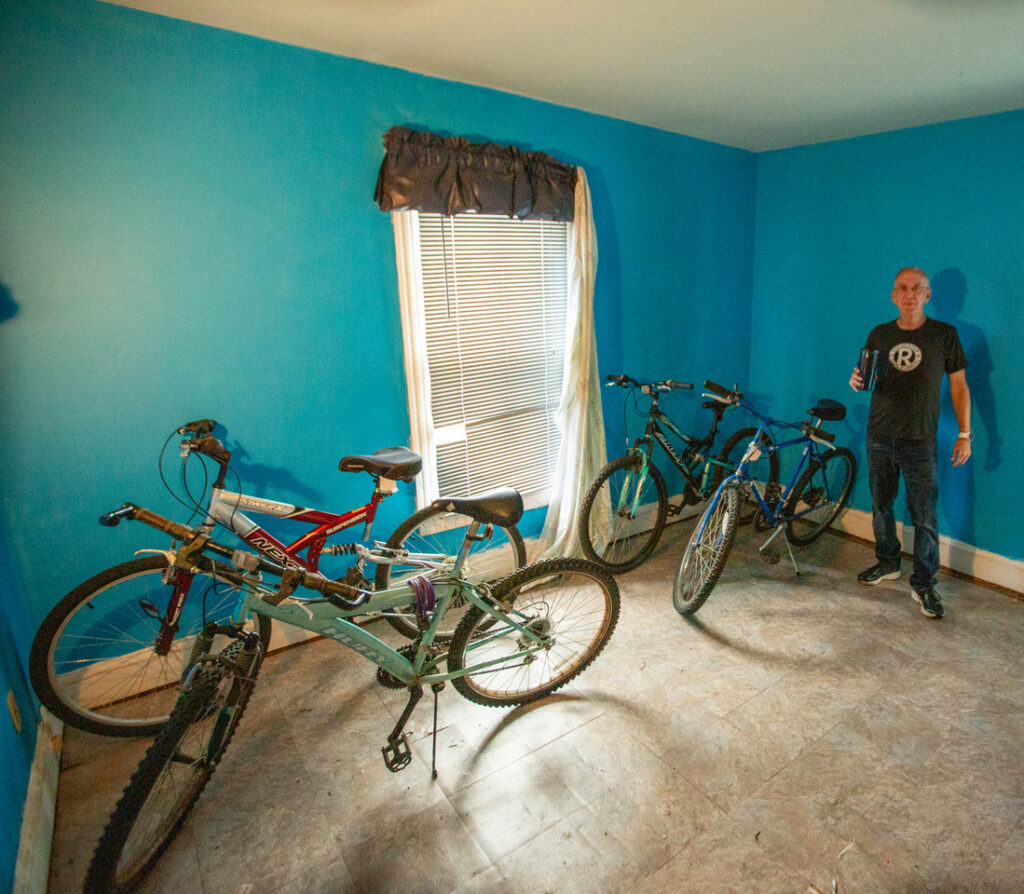 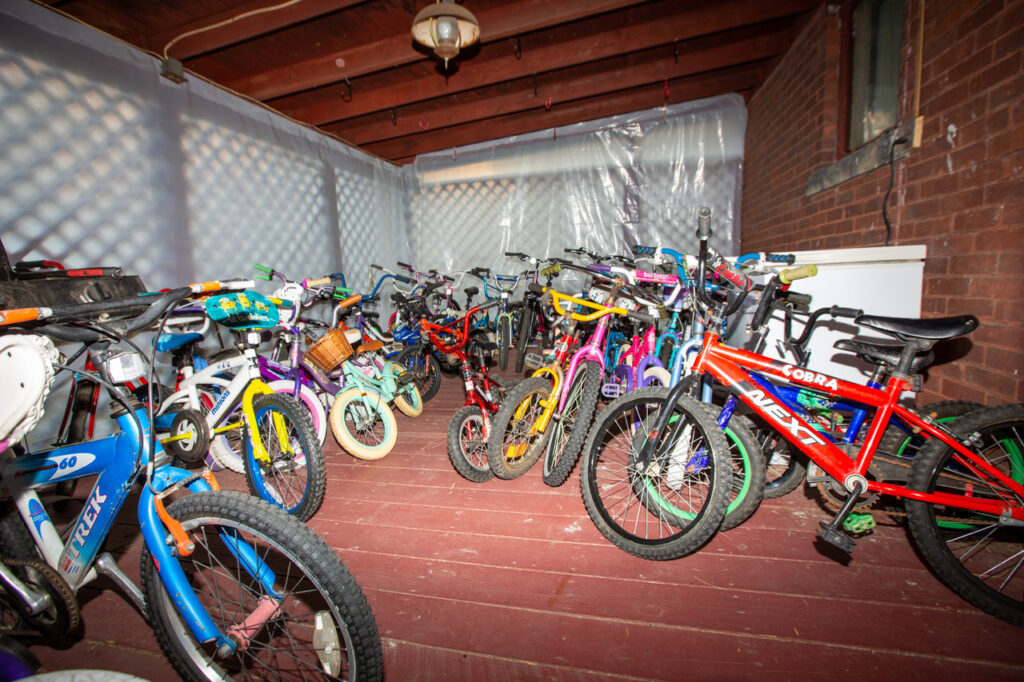 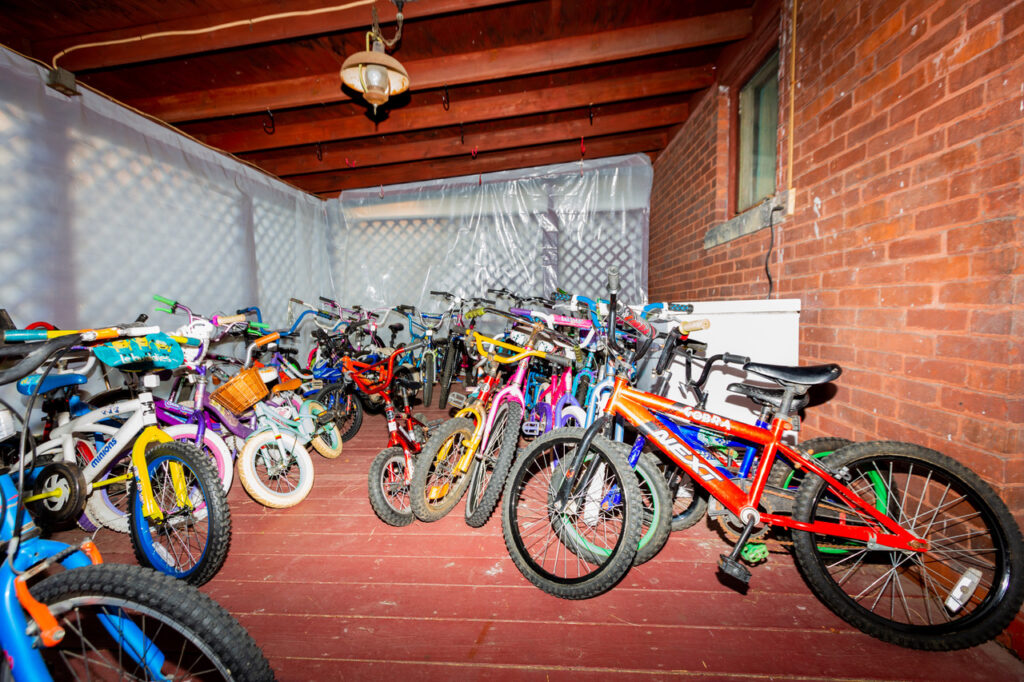 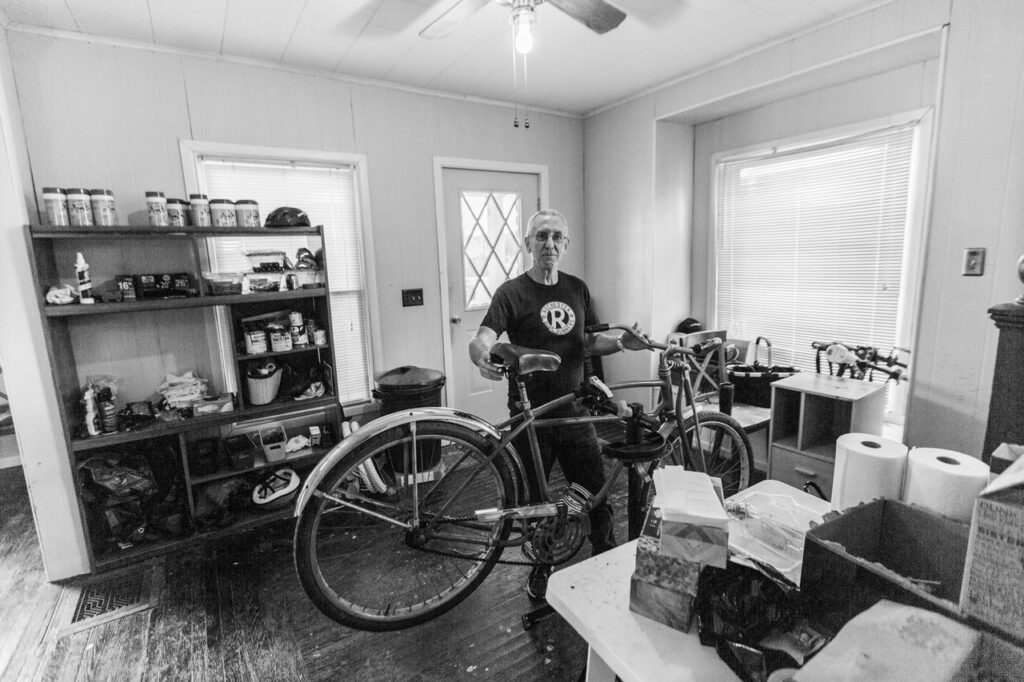 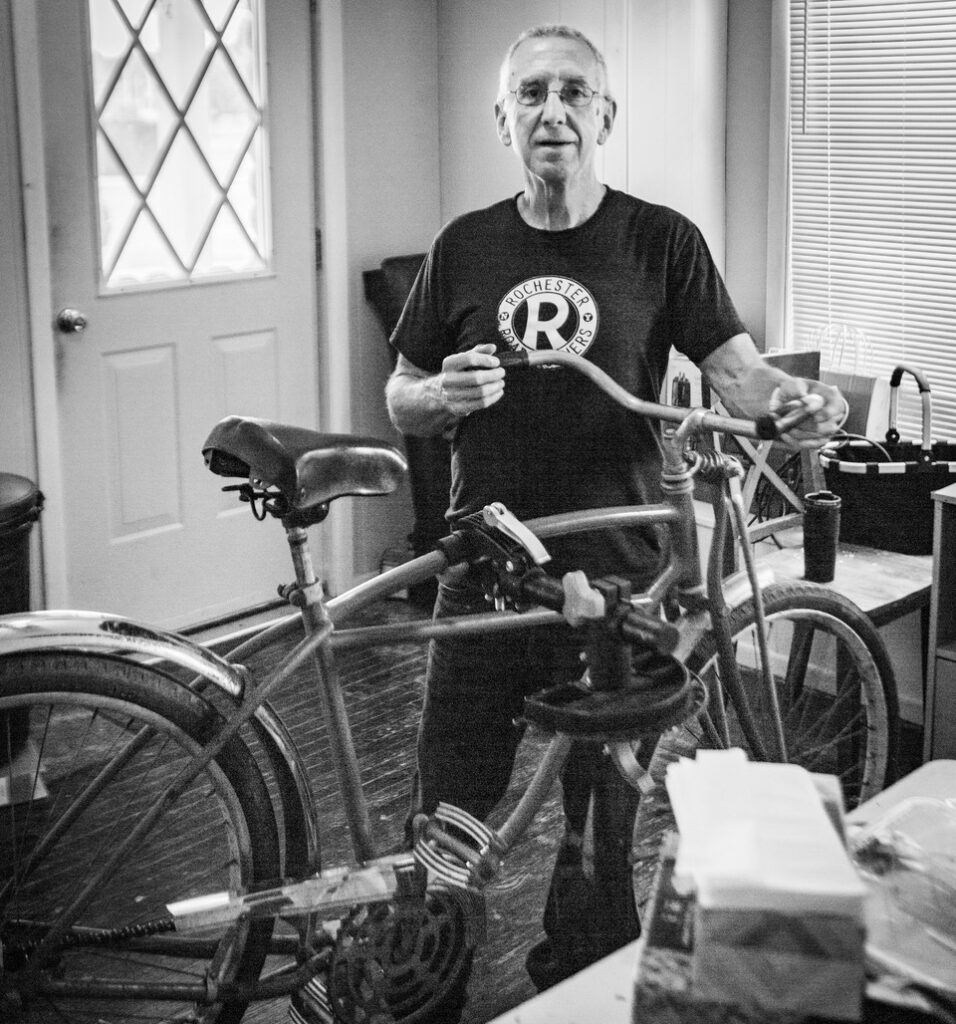