Roque is alive and well in Angelica NY, view gallery

Photos and story by Michael Whitney

On a warm summer night in the quiet little town of Angelica the silence is broken by the thwack of mallet hitting ball in a spirited game of roque. Roque is a game akin to croquet where in a small ball similar in consistency to a bowling ball is passed through wickets called arches with rules very similar to croquet. One of the main differences between croquet and roque are the playing surfaces. Croquet is played on a grass surface where roque is played on a hard packed surface usually sand or clay. Also, unlike croquet, roque has wooden boundaries along it’s 30 by 60 foot “court” so you cannot send the opposing players ball well into the next farm. 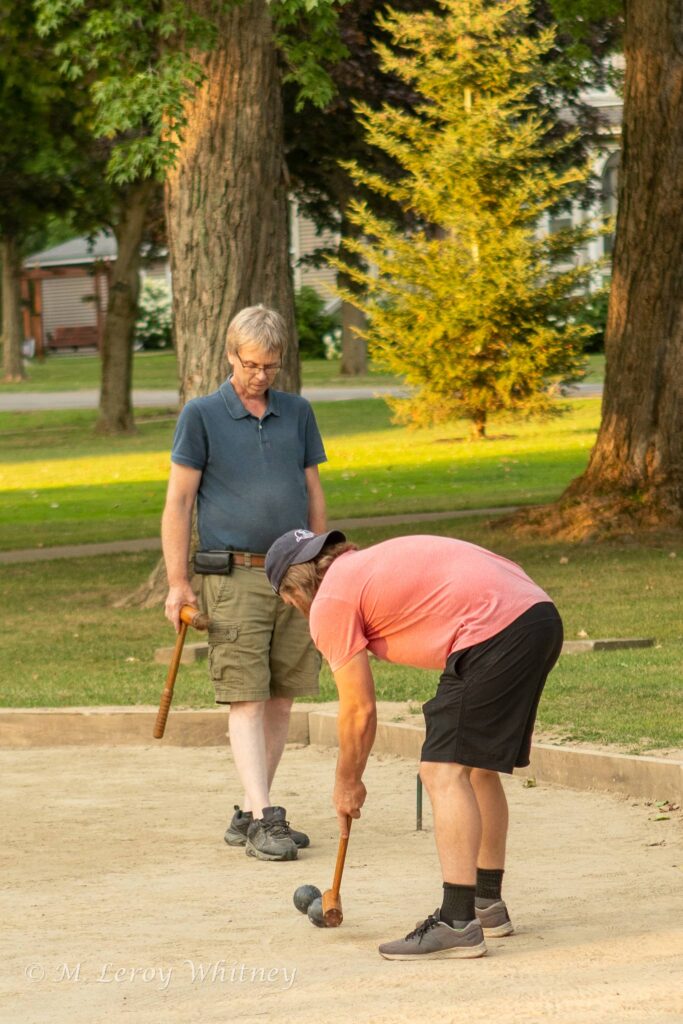 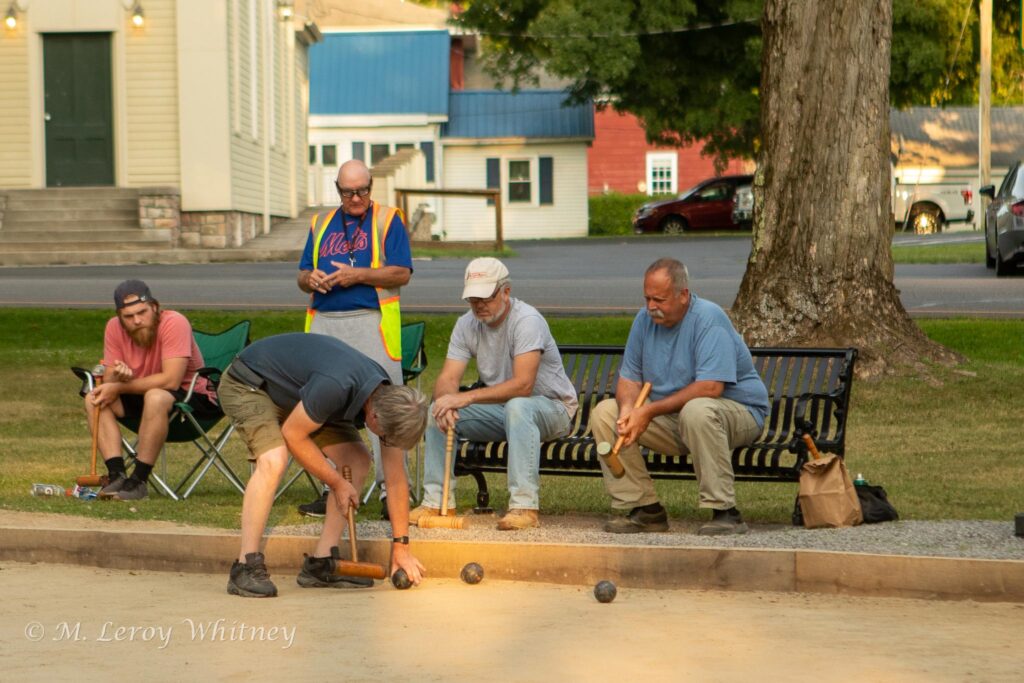 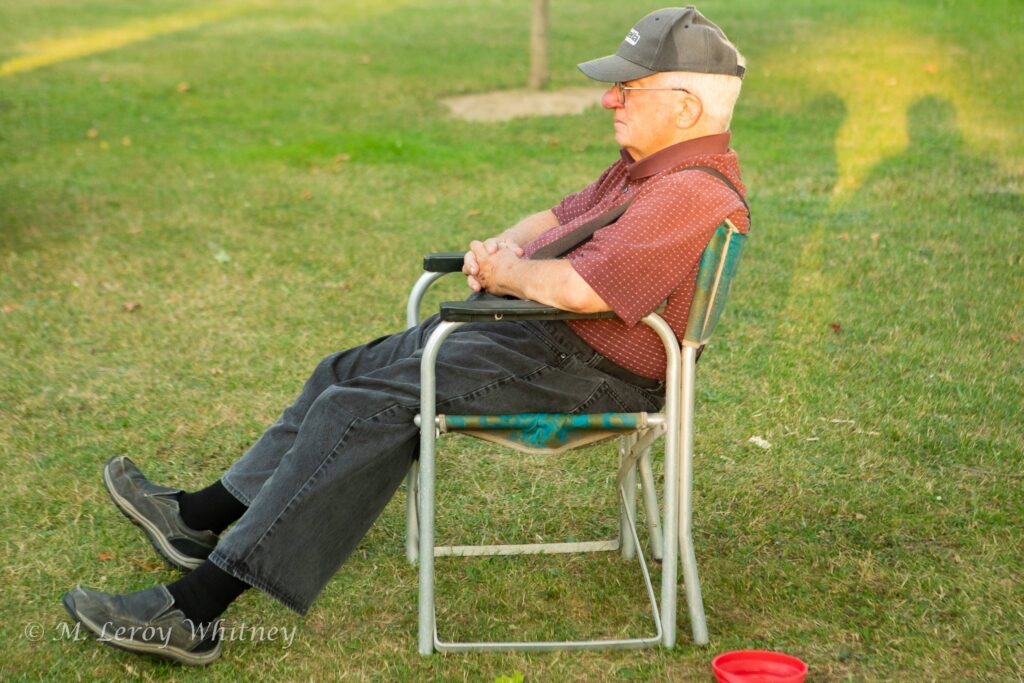 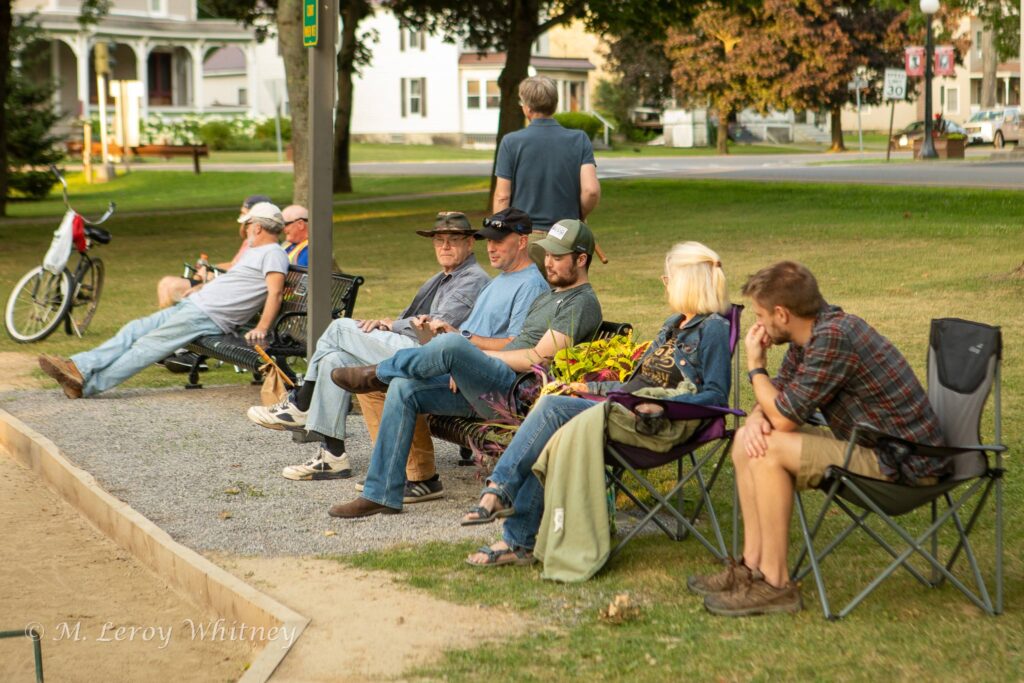 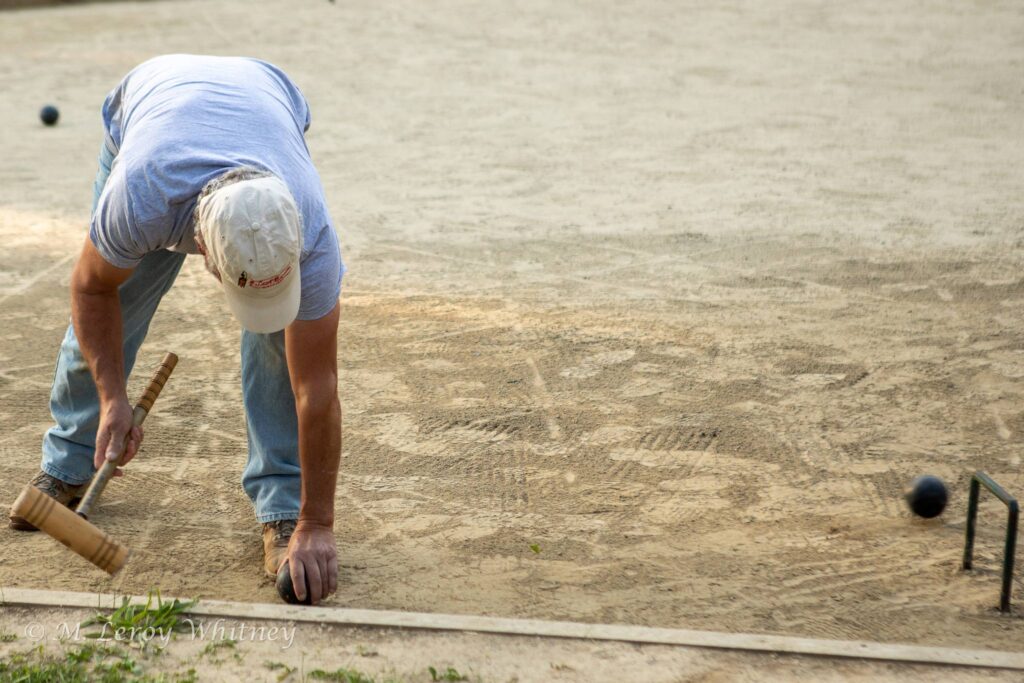 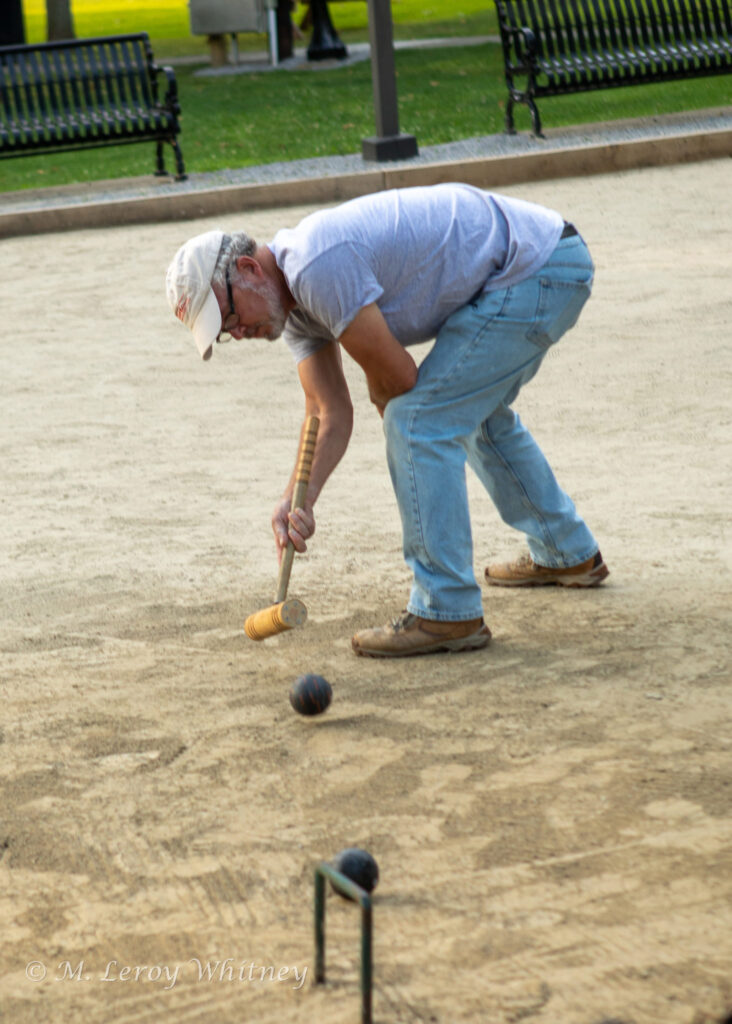 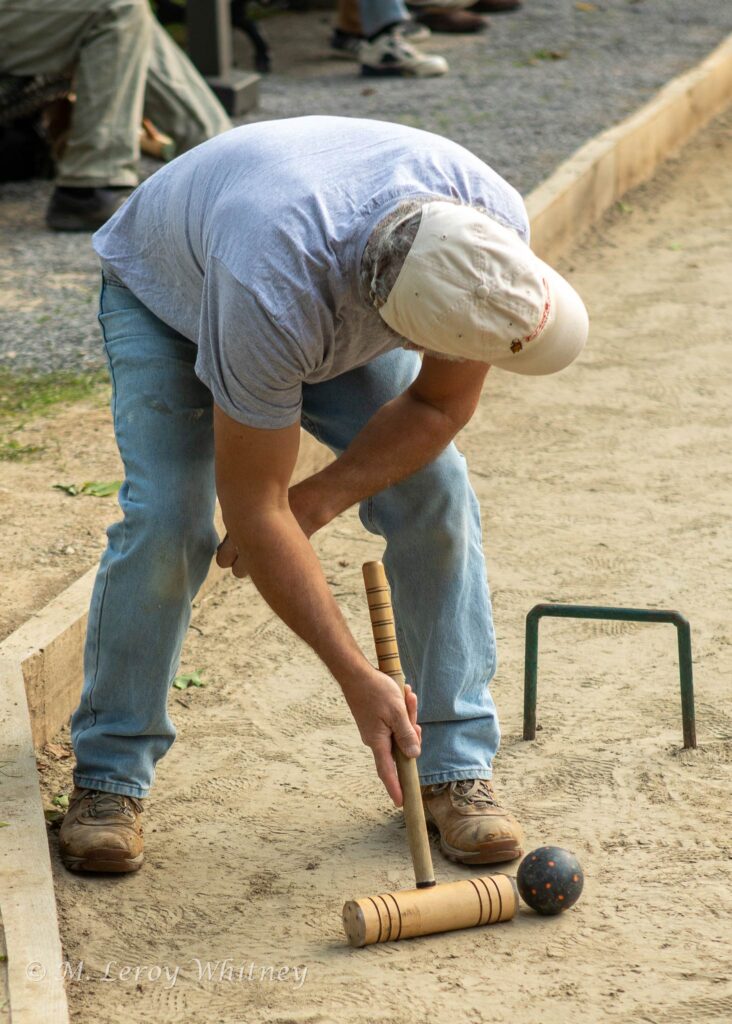 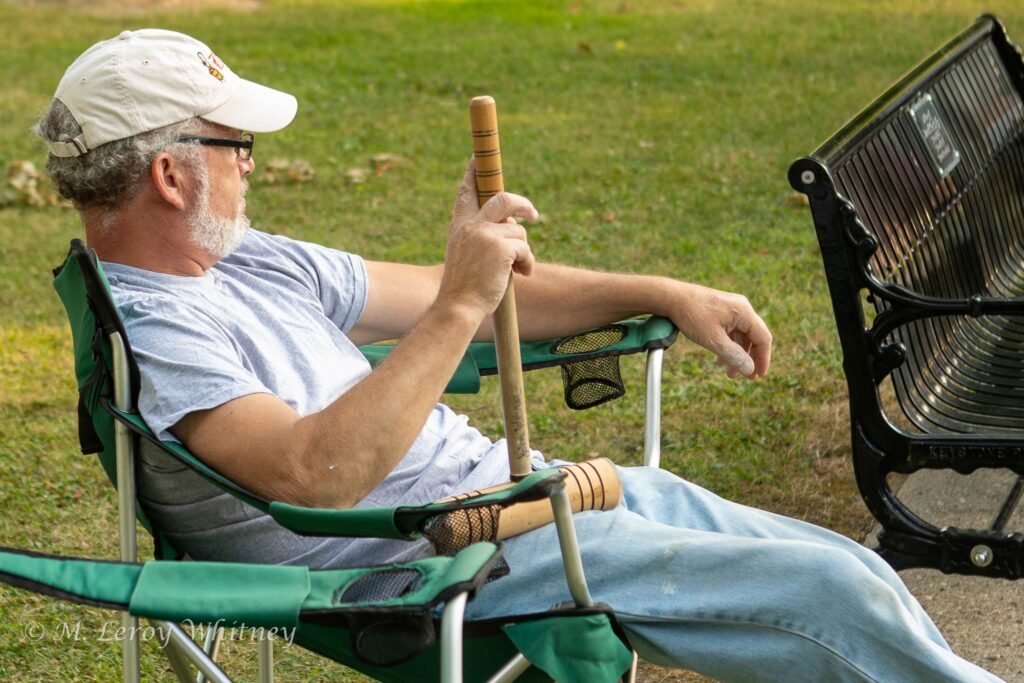 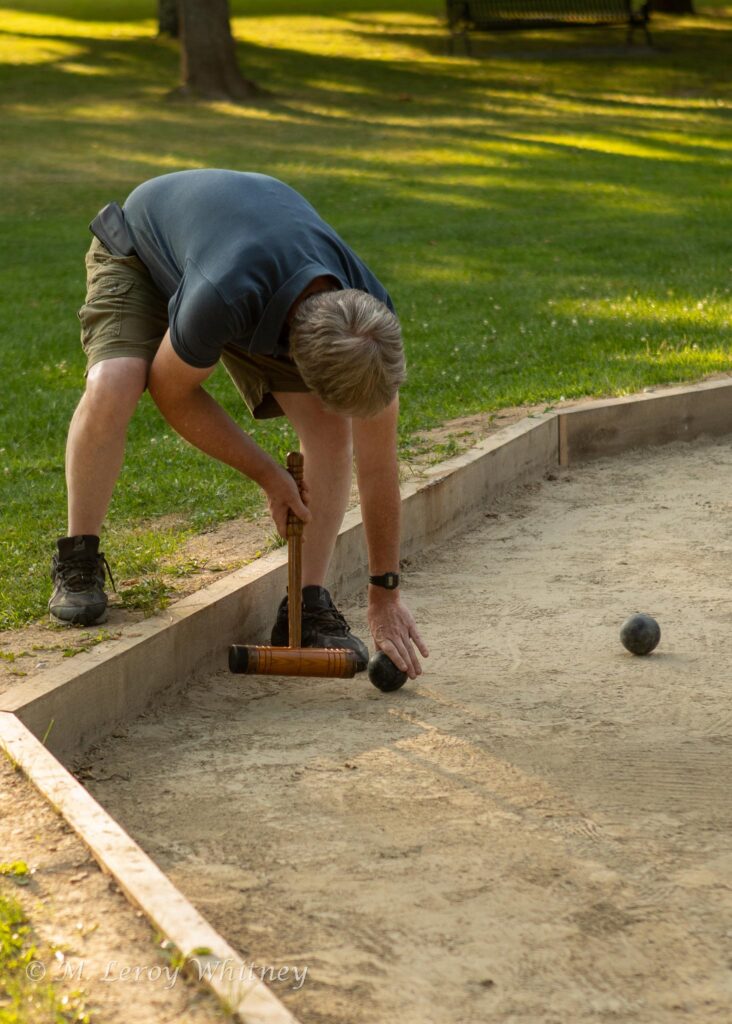 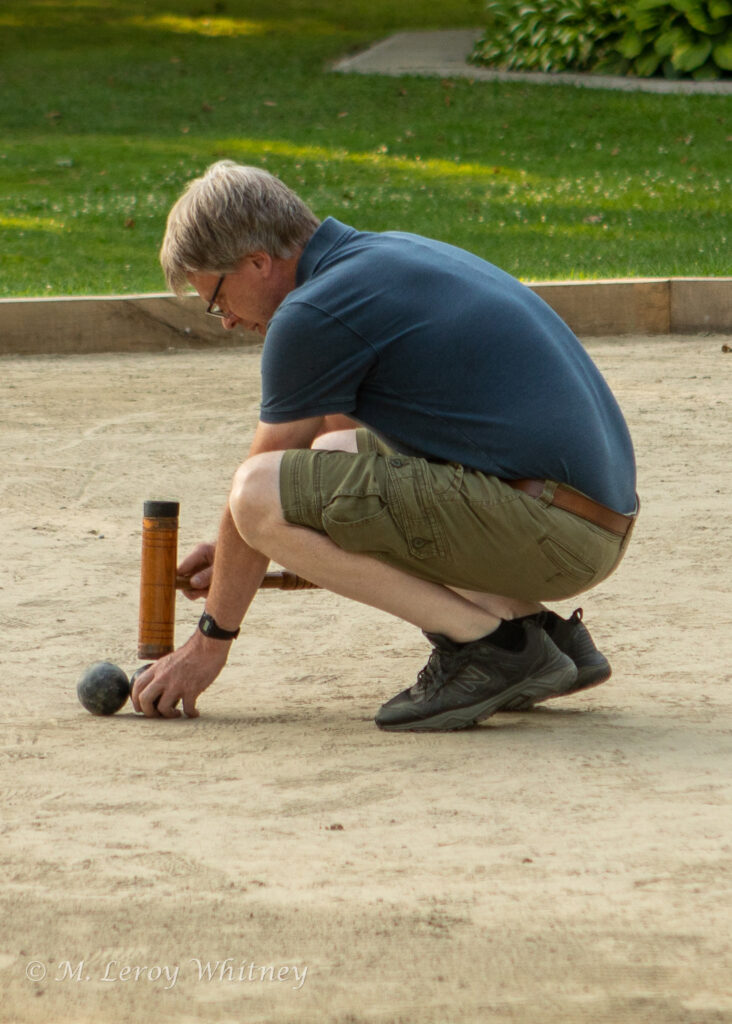 Angelica boasts one of the last remaining few roque courts in the U.S. where the game is often played out under the watchful eye of Jim Gallman, the local roque historian who remembers playing the game as a kid in the 60’s.  Although Jim no longer play’s, he has a wealth of information on the game. When asked when the game was first played in Angelica he responded, “sometime after the civil war”. He also jokingly had an explanation of why women do not play that cannot be expressed in polite company. But all joking aside, Jim was quick to state that in fact, several women do play in Angelica and are accomplished players including his granddaughter. Speaking of grandchildren, roque, especially in Angelica, is a generational game with the Gallman’s and the Hookers boasting 3 generations of players to date!

Speaking of the olden days Jim, explained that as a child in the 60’s, the kids played all day during the summer but come nightfall, they were kicked off the court when the men came to play, often long into the night. There were even times when on new year’s when a game was played before and after the clock struck midnight! Snow removal was indeed needed to play this winter celebration of years end!

Local town historian David Haggstrom tells us that the mallets used in the game, which are smaller than their cousins in croquet, are often handed down through the generations.  David uses a mallet handed down to him by his father. David also shed some light on the appearance of roque in Angelica stating that it was first played sometime in the late 1880’s.

The tradition of roque is kept alive through the hard work and determination of a few families including the Hooker family who spent a long hot summer day replacing the wooden boundaries and the players who do most of the work keeping the court well-groomed and ready for play.   David also stated that with the passing years, roque is being played not so much as a part of life but as keeping a tradition alive with 22 players on 11 teams competing in a bracketed tournament ending on the Sunday of Angelica’s annual Heritage Days Celebration.

If you would like more information on the sport of roque, come to Angelica this Saturday and Sunday August 7th and 8th where the simi-finals are being held on Saturday and the Finals Sunday afternoon! Talk to the players, Jim, David or others keeping a watchful eye on the court!

Sponsor the “Stomp Out Breast Cancer” Walk-a-Thon this October at St. James Hospital