BATH — To say that the Canisteo-Greenwood Lady Redskins are on an absolute roll, that would be one of the biggest understatements through the midseason. With enormous and exceptional wins over opponents like Wellsville, Hornell, Addison and a last second victory over Dansville in the wagon, Canisteo-Greenwood has been untouchable.

With a three-headed monster consisting of Lillian and Bailey Mullen, as well as the centerpiece to their electric offense in Brooke Burd, the trio has dominated the floor game in and game out, providing an overwhelming presence that has become a mainstay all throughout the season. One that has continued to render them untouchable.

Lady Redskins head coach Les York says after spending so much time together on the floor, when it be for their school or on the road partaking in travel basketball, watching his three offensive stalwarts grow into incredible basketball players has been absolutely compelling to witness during his time with the program.

“Bailey, Brooke and Lillian, they are maturing into basketball players. They are understanding the idea of basketball IQ,” he said. “They know the game, they play travel games. It’s been great, but the three of them together? They’ve grown up since starting to play together. They won a lot of games growing up, but now have the basketball IQ to see the floor really well. Lillian isn’t quite scoring as much as she normally does, but we spread the ball out so well so they can’t double team her. She’s handing out assists, she’s running the floor, she’s our ‘Team General’, and now I call her clutch because of the shot she had against Dansville,”

York added on, noting that “Brooke has played center like a center. She covered all the bigs from Dansville, Hornell, Cuba-Rushford, two girls from Arkport. She shut them all down. And she has learned offense and done so well with it. All three of them have learned so much, and have done so well.”

Saturday afternoon’s visit to the 7th Annual Dan Barkley Showcase in Bath would give them another opportunity to make some more noise against the defending Class D2 Champions, Andover/Whitesville, fronted by the brilliant play of Vanessa Hall.

The first order of business was pressure. Although at first glance Andover/Whitesville navigated their way through it to keep pace behind the Lady Redskins, it would ultimately reach a boiling point later on.

In the second quarter, the Lady Redskins would take over.

To close out the first half, Canisteo-Greenwood garnered contributions from almost every angle on the floor from their three dynamic scorers, as the team accounted for a 20-6 run through the second quarter to pull away towards victory, despite a late Andover/Whitesville spark in the second half, clinching the overall Showcase victory for Steuben County with their fourth win, as well as their 13th straight of the season by a 63-47 count.

“When a team can attack you from a bunch of different ways, scoring from the inside and outside, it’s going to hurt,” Andover/Whitesville co-coach Jake Bannerman said. “When you try to stop one thing, they dump it down to Burd. After the initial shock of playing them, I thought we did a good job. Fillmore was tough, but this team has a number of weapons. They are going to do well, and they’re undefeated for a reason. Despite today, we saw some positive things even though we were down a couple of players who average 30 minutes a game for us. Other girls stepped up and got a ton of minutes.”

Because of the pressure out of the gate, the Lady Redskins (13-0) were able to capitalize on the start they wanted to have against Andover/Whitesville, going forth to score eight of the first 10 points. The bulk of which were scored off turnovers forced from the pressure, and punctuated later by both Lillian and Bailey Mullen.

But despite some early trouble, Vanessa Hall was able to get Andover/Whitesville (7-2) back on their feet with a response, netting the next five herself to knock the deficit down to five. The deficit would ultimately wind up being six going into the second quarter, as the Lady Redskins wrapped up shop with a 16-10 lead.

The pressure being stacked against Andover/Whitesville by the Lady Redskins would see a drastic escalation come the second quarter, jump-starting another run in the process of it to eclipse double digit territory, led by their three main playmakers on offense. In all, a 20-6 half-ending run was gathered, as Canisteo-Greenwood closed out in complete command of a 36-16 lead.

“I preach every day in practice about working harder on defense, and we’ve done that in the last two weeks than we have all year,” said York. “Vanessa is a great player and she’s No. 2 out of thousands of players in Section V. We had to do something to stop her, and she still had 29 points. She’s just a great player. Another thing we did well, on offense, they moved the ball around so well. They played and shifted so fast, no one can pass or bounce like that. Hats off to those kids, they played beautiful basketball. I think we had 14 assists. That’s 28 big points off of that.”

After Canisteo-Greenwood started the second half red hot once more, Andover/Whitesville would navigate their way through rough waters to deliver a strong finish to the third quarter. Led by Hall and her back-to-back three-point spark, as well as a buzzer-beating shot from Graci Lewis-Ellison, the team would finish with 11 of the last 13 points to build a ball of momentum going into the last portion of time, trimming the deficit down in the process.

“I think we had 16 points at halftime, and then we ended up finishing with 47,” said Bannerman. “We did a much better job on offense. Missing Kennedy (Bledsoe) today, a starter, and then Zoe (Baert) goes down in the first three minutes, it was tough. We had Olivia Waters come up from JV to give us a ton of minutes, and the rest of the girls worked their tails off to keep us in it. We missed a few buckets early, but if we can have that effort going forward, we are going to do a lot of damage.”

But the spark was ultimately blown out by the Lady Redskins in the last eight minutes of play, as they created one final strong finish to the game to wrap up the Showcase in Steuben County’s favor with the fourth and final clinching victory of the kit and caboodle.

Both Lillian and Bailey Mullen earned Player of the Game nods for the Lady Redskins, with Bailey leading all scorers with her game-high 24 points and seven rebounds. Lillian followed behind with 16 points to go with 14 assists to record the first double-double for the team, while Burd followed with the next behind 17 points and 10 rebounds.

Hall led Andover/Whitesville with four of the team’s six three-pointers, on her way towards a game-high 29 point performance. Lewis-Ellison would finish with seven points, while Gabby Terhune had six. Andover/Whitesville will now take some time off to prepare for a 7:30 p.m. battle on Thursday on the road, visiting the Wellsville Lady Lions.

Canisteo-Greenwood will head back home come Wednesday night, as they get set to battle the Alfred-Almond Lady Eagles in a 6 p.m. tip-off. 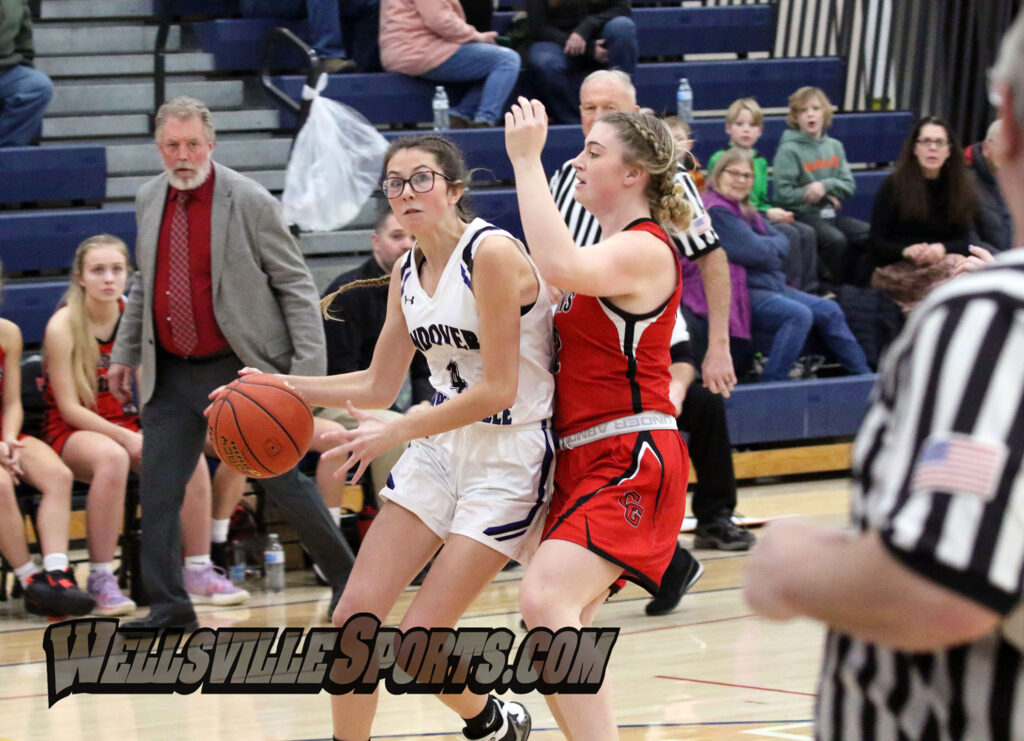 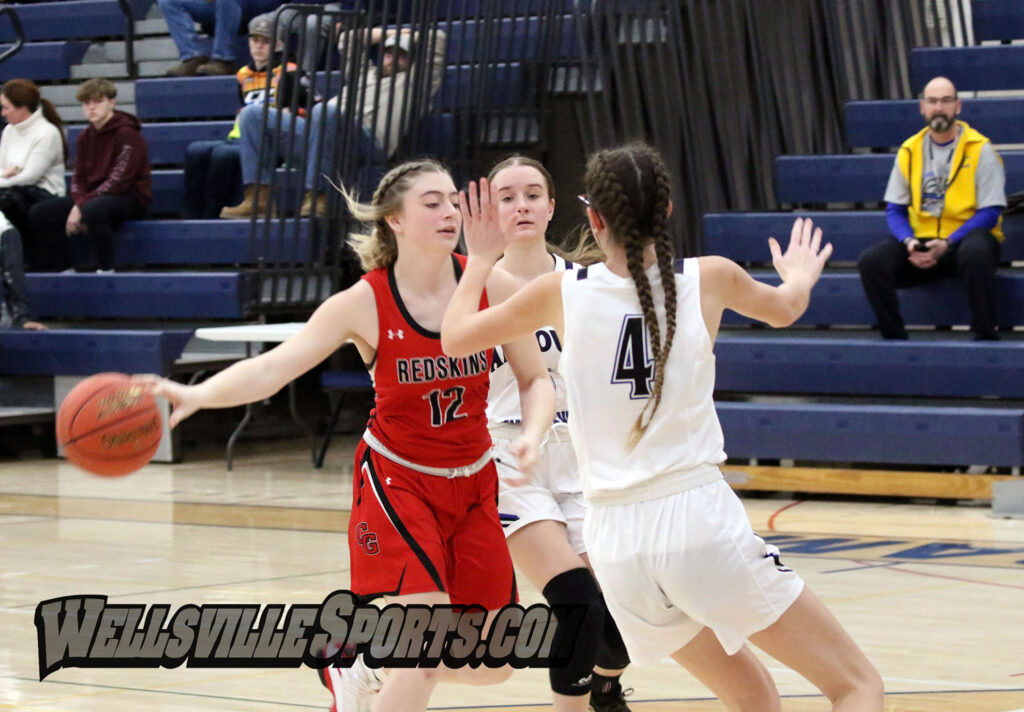 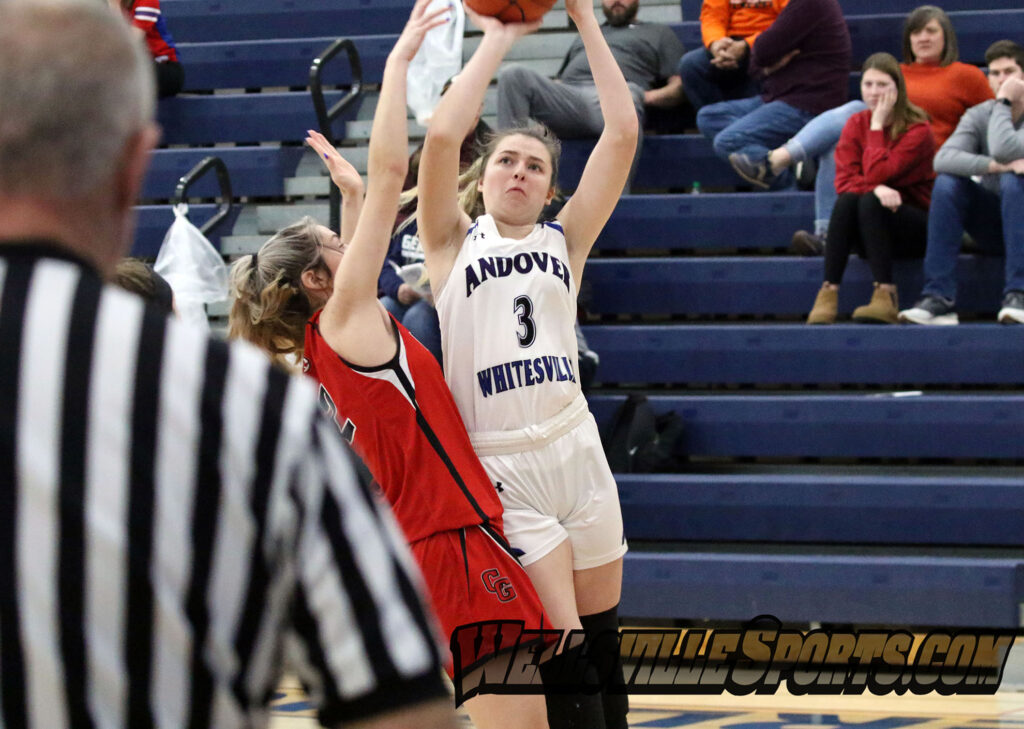 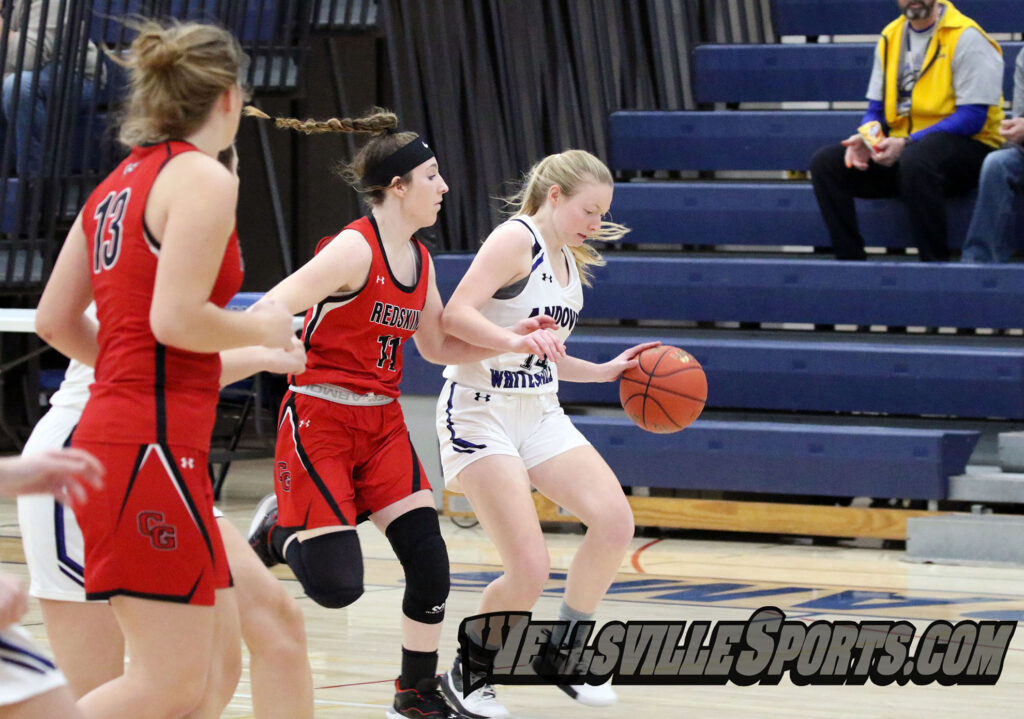 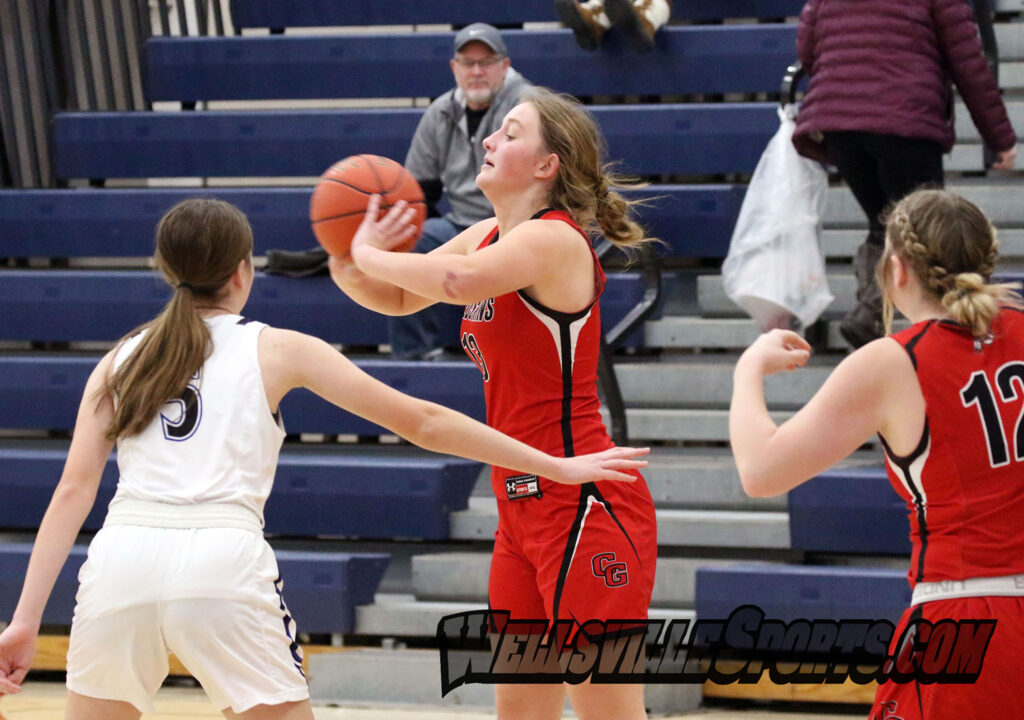 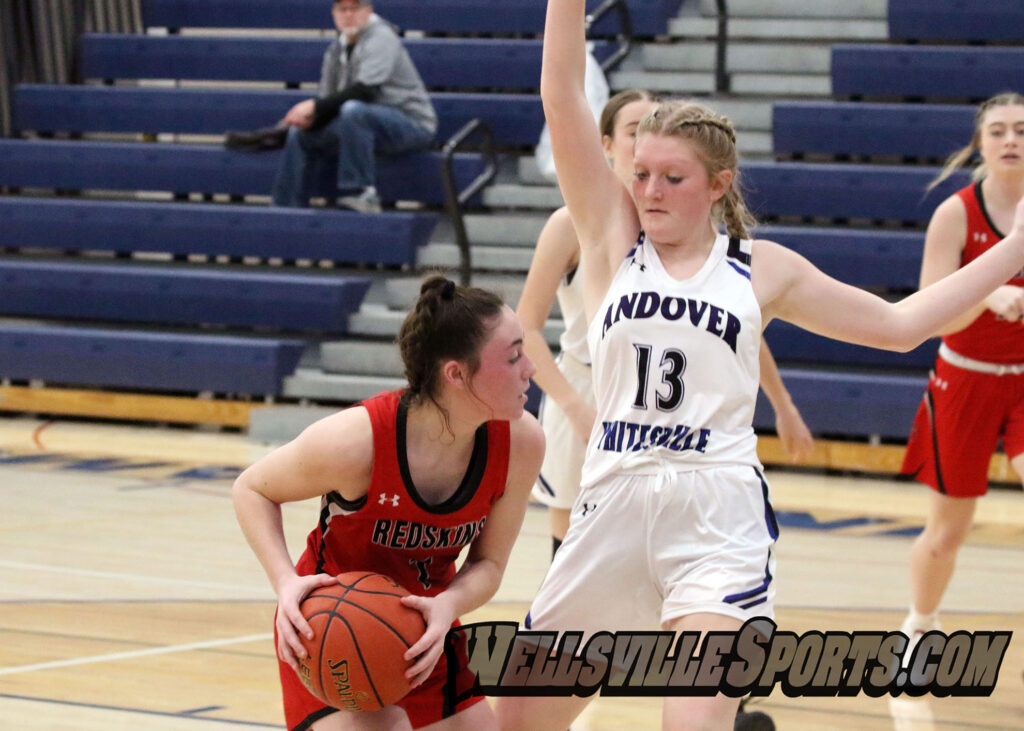 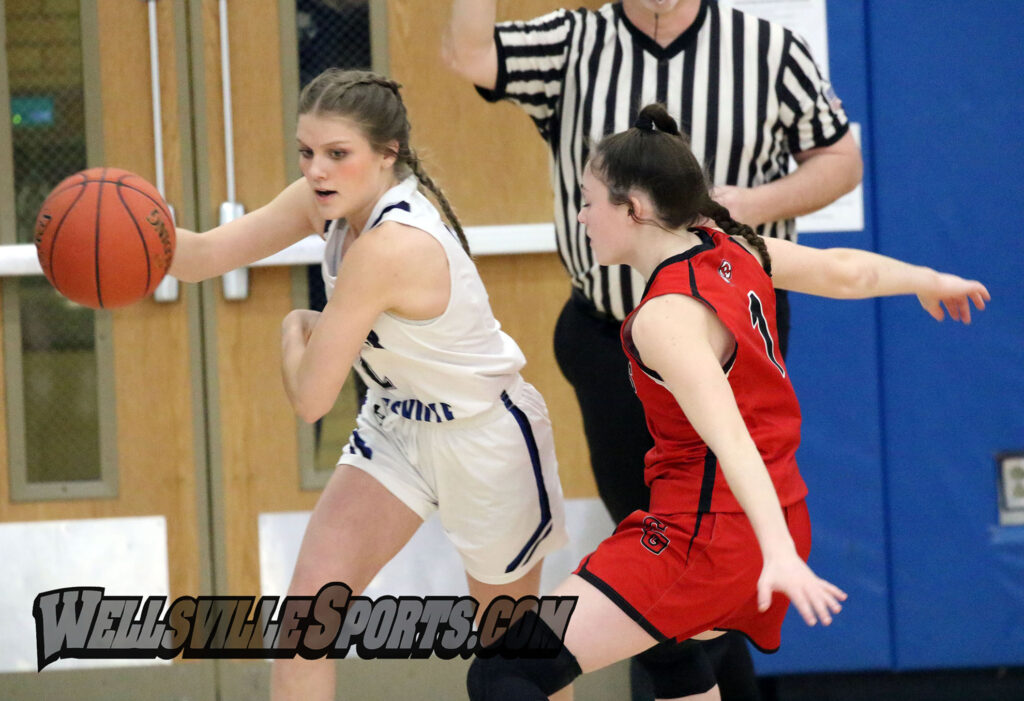 Troopers stunned by homemade inspection sticker during investigation, but the driver was honest